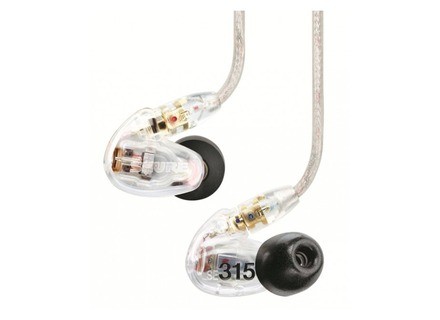 SE315, In-ear or ear-Pad monitor from Shure in the SE Models series.

Eroachguitar's review"Pricey, yet Durable Intro to the world of In-Ear Monitors"

Shure SE315
4
I'm a professional guitar and backline technician. My main job on tour is to keep two guitarists and one bass player happy about their gear, and sounding as good as possible. My job is 98% preparation, and 2% execution. However, the execution is the focal aspect, and I shoot for perfection at every show. A "glitchy" concert is memorable, and not in a good way.

Initially, I relied on listening to the band as closely as I could, and keeping an eagle eye on my guys for any visual indication that something wasn't right. This was quickly revealed to be a less-than-ideal method of monitoring the guitar and bass rigs. There were times when a guitar or bass signal would drop out (for one reason or another), and because my ears were constantly trying to make sense of the aural onslaught of stage volume, I didn't always hear it. So I would be tuning a guitar during a song with my back to the stage, and only when our drum tech would run across stage and yell "SOMETHING'S WRONG WITH KENNY'S BASS!!!" would I know that anything was amiss.

So, armed with that experience, I decided to purchase a set of In-ear Monitors, or "IEM's" as they are sometimes referred.

What I settled on were the Shure SE315-CL, single-armature IEM's. The 315's are one step up from their entry model, the SE215. At at list price of $199, one may wonder how anyone could consider them a more barebones model of earphones, considering most consumer earbuds don't even crack the $100 mark, and some truckstop models can be had for under $10.

Several things differentiate the SE315's from standard earbuds. The main thing is that most garden-variety earbuds utilize dynamic drivers, which are basically akin to tiny speakers. They move a lot of air, hence their capability for strong bass response. But they are often not designed and voiced with the highest sound reproduction quality in mind, and frequency response can be lacking through the mid to high frequency range.

The SE315 utilizes what's known as "Balanced Armature", which is different kind of driver, used in hearing aids and prized for their accurate reproduction of higher frequencies. The downfall is that BA's don't like to share frequencies, and it's common practice for IEM manufacturers to build more than one into each ear for their more expensive models, with each driver dedicated to a specific set of frequencies. This allows the most clarity and separation in the frequency response, since the audio bandwidth is not all squeezed through one driver.

This brings me to perhaps my only complaint about the SE315's sound quality: the bass response. The SE315, being on the lower end of the spectrum in terms of Shure's tiered IEM models, utilizes only one balanced armature per ear. For those who like a strong bass response, these IEM's are not for you. I personally prefer an accurate reproduction of the mid and high range to the lowend thunder, especially when monitoring the artists on stage. I simply need to hear the instruments and amplifiers and know that they are functioning correctly and in tune.

I also like to use my SE315's for casual music listening. They have a clarity and sensitivity that is unmatched by any other bud I have put in my ears by a wide margin, and makes even listening to familiar music enjoyable and interesting.

Another thing that differentiates the SE315's from your standard iPod earbuds is build quality. The SE315-CL is extremely well built, sporting a thick, Kevlar-reinforced cable that connects to the monitors via snap-in coaxial barrel connector, allowing full 360 degree rotation. This is a great design point, as I've seen several $1,000+ custom molded IEM's that utilized a more fragile, less-ideal two-pin connector system that had no flexibility at all.

An ear-forming wire and sleeve on each side ensures a comfortable fit to keep the buds in place and the cable out of your way once they're in place. The cable itself is plenty long enough to run down the back of your shirt and connect to your wireless pack or MP3 player, and in most cases, still have enough slack to put it in your front or back pocket.

The SE315 includes several kinds of replacement tip sleeves, and a zippered soft pouch, which I elected to eschew in favor of a miniature Pelican 1010 Series case i purchased from Tour Supply (www.toursupply.com) to better house and protect my IEM's from moisture and trauma. Of the included tip sleeves, I prefer the medium olive-style, although some users may opt for the special deal Shure has worked out with Sensaphonics where you can have custom molded tips made from your ear canal molds when sent in by an audiologist. Having a mold of your ear canals made by an audiologist in an interesting process that involves a cotton ball with a string attached to it stuffed into your ear canal, followed by a sticky foam compound injected into your ear. It's very weird. I suggest you try it.

Overall I find the Shure SE315's to be a great model of IEM for people who value durability and clarity, but don't need an overwhelming bass response. For the gigging musician who wants to utilize in-ear monitoring without the brutal cost of custom, multi-driver models, these are also a great solution.

Other Shure in-ear and ear-pads monitors