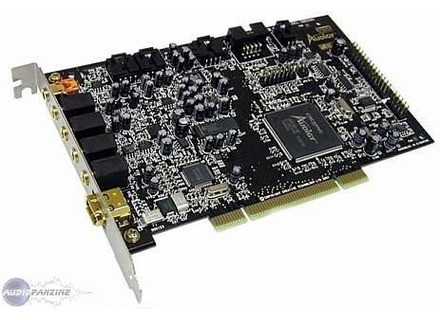 Value For Money : Excellent
View other reviews for this product:
APRS testing, quality audio silent than enough for what I wanted to do (computer music), in addition, she had also used to watch DVDs and dedicates a sound card audio Pro did not suit me in the IMMEDIATE.
I have a XP1800 + with 512 DDRAM and 40GB and trs works well, despite the criticism I've read here and l.
I use it primarily for recording vocals and guitars, passing through a microphone Rode NT-3, a Mackie 1604VLZ.

The installation is longer than I could imagine and this card does not work with a Duron 600 (I prcdemment).
For rgler, there is no particular problem set by the development with Cubase VST 32.Mme not need the manual!

The drivers are stable and for the length to install them, I do not want to MJ. All fawns, it works as well trs a.
I work on Cubase VST 32, and APRS moults tests, I have Russi a latency of 20 ms without dcrochages, at least with 8 audio tracks + 8 Vsti (SampleTank) and south .

It's been two months that I use and I am totally satisfied. The only worry is the fact that it can not record 96 kHz/24-bit but hey, we can not have everything!
Good qualitprix.
It is a card I can advise everyone and I do not regret that choice at all, but I do not Rasht, not because of its quality or default, but because I I'll get a computer "ddiquot; the music so I would take over the range from a manufacturer really specially.
See the source
Did you find this review helpful?yesno
Cookies help us improve performance, enhance user experience and deliver our services. By using our services, you agree to our use of cookies. Find out more.