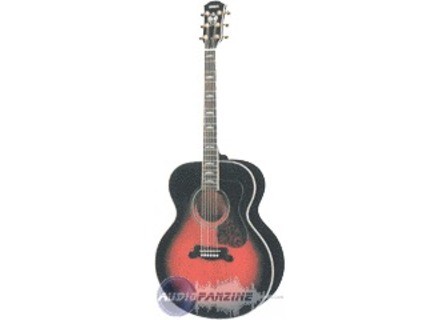 All user reviews for the Yamaha CJ-12

Yamaha CJ-12
5
I bought this guitar new from Soundslive in Newcastle for £390, complete with a fitted flight case, two packs of strings and a capo!
I wanted a jumbo acoustic and had been looking at Gibson/ Epiphone but the guy in the shop reckoned that the yamaha was better than the epiphone and was £300 cheaper!

The build quality is superb- you would think that the guitar was more expensive as it really is beautifully made.
Tonally, it is quite bright for a jumbo but sounds brilliant. I recorded a demo with it and recorded it sounds great- a real Neil Young acoustic tone!
Obviously the access to the higher frets is problematic, but I believe that if you're looking at a guitar like this then you aren't getting to play above the 12th fret much anyway!
Other than that, the string spacing is superb and the neck is much more reminiscent of an electric guitar than an acoustic-it reminds me of the neck on a Les Paul

I'm not overly keen on the colour- I wanted a blonde guitar but this model only comes in a violin sunburst finish so its a little darker than I wanted. However, the quality is that good that I forgot about the colour. Besides which, everyone else seems to like it!

As I've said, faultless really. It truly is a wonderfully well made guitar and I would recommend them to anyone. Having also played the epiphone version I can say that I do prefer the Yamaha and it's half the price. The Yamaha feels really sturdy but has a great kind of worn in feel when you pick it up. It's really playable and sounds great.

If you're in the market for a jumbo acoustic then I strongly suggest that you check this out. It's over a grand cheaper than the gibson and it's half the price of the epiphone- other than those models jumbos aren't all that common by anyone else (and certainly not within what most of us would call a realistic price bracket).
My first impressions when I played it was how I thought they must have put the wrong price tag on the guitar because I caouldn't believe that it was only £300!