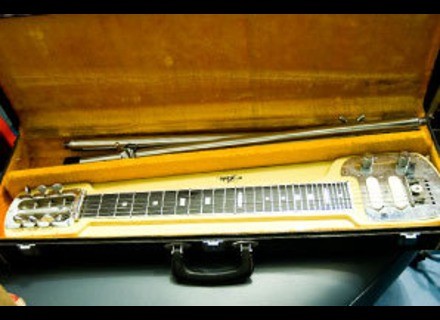 IT IS EXACTLY AS YOUR TWO REVIEWERS STATE. I GOT MY EXAMPLE, MANY YEARS AGO, AS FOUND IT'S STRINGS WERE MUCH THICKER LIKE A BASS-GUITAR. THOUGH HAS TWO SINGLE-COIL PICK-UPS, NEXT TO EACH OTHER. THERE IS NO SWITCH TO SEPARATE , OR COMBINE THE PICK-UPS, AS ON A CONVENTIONAL ELECTRIC GUITARWITH MULTIPLE PICK-UPS IN OPERATION, SO ASSUME ONE VOLUME AND THE OTHER TONE, AND BOTH CONTROLLED BY A SERIES-WIRING BETWEEN THEM. COLOUR IS EXACTLY AS IN THE PHOTOS IN YOUR  TWO REVIEWS, IN MY EXAMPLE, "ARIA" STICKER, IS ON OPPOSITE SIDE OF STRINGS, TO THAT OF YOUR EAMPLE. SOME PAINT FLECKED-OFF, IN THE LAST 53 YEARS, BUT OTHERWISE IDENTICAL. TUNED IT FOR FIRST TIME, JUST NOW. ONLY LEARNING.

This instrument's workmanship along with its electronics and finish seem to be very superior. We have noticed that its Intonation is adequate. Its neck and touch and feel and shape all complement our playing style.

So, far (from what we have found) there are only 17 of these units in existence today.

Aria 6 String Lap Steel
5
The Aria 6 String Lap Steel is a rare instrument, the model of which I've used was made in 1965. The studio that I worked at before the one I'm currently at had this, and I still use it every now and again as I still work with the producer that owned the studio. I don't know much about the make up or the origins of this lap steel, but it's got dual single coil pick ups. It comes with it's own legs for standing it up on it's own if you so choose but I'll usually just put it on my lap without the legs.

Playing the Aria 6 String Lap Steel is a real pleasure and it feels good to play and doesn't hinder playability in the least - if anything it helps those just starting out. The pick up has tone and volume control knobs, although petty much what you hear is what you get since there isn't much in depth control. This doesn't matter too much as I find the inherent sound to be quite good...

The sound of the Aria 6 String Lap Steel is pretty awesome as I've used it on a number of recordings for both my own songs and for other bands. I'm not the best lap steel player in the world, but have recorded with it myself and have also had more experienced players use it on some of my recordings and others. I've primarily used it with a '65 Fender Deluxe Reverb and usually have it up with a few pedals like a T-Rex Replica and Dr. Swamp for extra effects. I love the sound I get with this steel.

You won't find too many Aria 6 String Lap Steels out there, as the one I've used is the only one I've ever seen. I don't know how many were made, but there isn't much information out there about them on the web so I think it's safe to assume it's quite rare. I'm glad that I have access to one but if I didn't I'm sure I could replace it with something comparable somewhat easily. If you do come across an Aria 6 String Lap Steel it's a great instrument and one to check out and/or buy if possible.