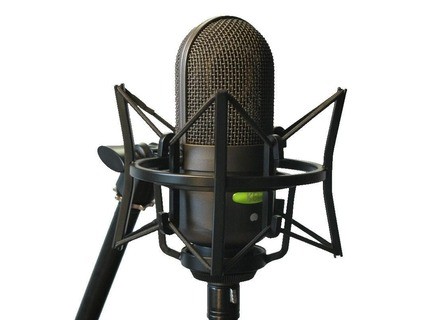 Kel Audio Design HM-2d
4
This is a large diaphragm condenser microphone. Thus, it's definitely something for use in the studio and not live.

This microphone is notable mainly for its differences to other condenser mics. Some of the cheaper ones tend to pick up a lot of ambient noise, mostly the air around the microphone. This microphone rolls off a bit of the unnecessary high-range frequencies and kicks up the midrange, making it great for vocals that have unpleasant high frequencies when recorded with other condensers. At first I did have a bit of a problem with its lack of focus on transient detail, but I later realized that it capture plenty of this, just not at the frequencies where it's usually more obvious. Thus it's not a perfect mic, however It's a good choice to use in combination with other condensers on acoustic instruments. The first thing I noticed about this mic was that it allowed me to naturally have more space in the mix. Combining condensers can make it difficult to really add depth to the sound. This one didn't give me such a problem. It's honestly not the most accurate mic out there, and in reality, probably isn't the first condenser you should buy. But when you are having issues with too much high-end on your mix, this microphone can really come in handy, as it will give you a completely different texture than another condenser probably will. T I have tried a few other condensers in my time, and I haven't really encountered any like this except for some that were pretty high end large diaphragms. Even then, those had less high-frequency rolloff than this one did, and didn't color the tone in exactly the same way. he best thing about this microphone is that it's LESS THAN $200! That's right, a really cheap condenser that doesn't sound bad at all. Again, you're probably better off with this and something more typical, but you can't really beat the price.
Did you find this review helpful?yesno
»

pierhomme's review (This content has been automatically translated from French)

Kel Audio Design HM-2d
5
Micro fate in the metal. Much about the amps guitars on the song plutt pushed.
This is prcis by Kel. So I jump on it since I see more of Mesa and 5051 as microphones in front of my Fenders.
Condenser microphone capsule for 1, 5. "So not a small capsule, but not very big either.
It should therefore have a sound that falls down with a lightweight lack of precision in transients.
It seems that before a kick or a pass overhead too, as you tell me any static.

I use it for November 08.
I was in command August 08 in "pre-order, delivery in September."
APRS four months of waiting, Canadian book me.
Just time for a beautiful display of Bordeaux in the metal.
Live in use on Randall amp, the sound is clean trs. We hear the neighbors too, but this is the problem of static live. Ct I on the other one SM57. the kel is more powerful than the SM57. The sound is immediately more Submitted, he goes down much more in the bass. The qualisation is minimal, just cut a little too serious not to annoy the neighbors (bass) and treble to avoid the terrible noise inhrents this kind of service.
Last days I used the studio in parallle with a SM57. The SM57 sounds normment potato, a raw sound, trs typ. By him against the Kel is much more dynamic. The passages between the saturated (on the stoner) and is really clear diffrence. On the guitars a little planing, an atmosphere is immediately noticed. The sound is warmer. As against a prvoir prampli with pad. On my Envoice I quickly overload the input. It took me to pass on a slightly less powerful prampli ...
Anecdote in this record. The guitarist played REALLY super hard. So strong that a crt my SM57. The decision saved kel

On the vote, a prsence is immediately felt. I try on my little project studio and a Mindprint Envoice.
The voice is well reproduced. Submitted are the serious effect of prsence without too much pressure. Highs are not shrill. The mdiums prcis are soft. For a male voice, the sound is really perfect. Easy insrer in the mix with a lot of space.
Have you tried many other models before acqurir?
No, I rather wanted to test. On guitars, I used the SM57, the E609. Therefore not comparable. Except that the price of the micro is 140. So in the same price range. So the more hsitation.
I AIM marketing is on the microphone. Made for metal. So I wanted to test. For now, he's right.

Exprience I would do with that choice, by the way, I'll do it again, I wait for the returns in 2008 to take a test 2 for the OH, and I would take a Kel HM-1 history to group a little port.