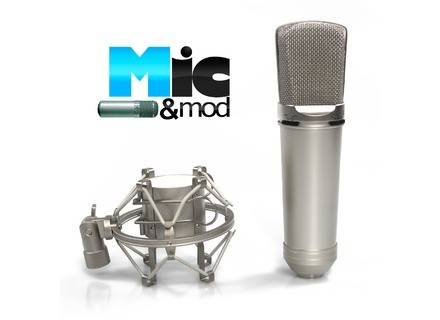 jonhsaylor's review (This content has been automatically translated from French)" Micro in quality / price ratio exception."

Mic & Mod M-87
5
Used to singing in the electronic field!

Using this mic for almost 3 months I deduce that this mic is excellent quality.
I'm not above, its very hot and wonderful replica U -87.

3 of 19 people found this review helpful

I tested the M87 AND m87 premium with the other side a TLM 103
1 to 189 euros, I do not even know if it's worth talking about so it is below the TLM, but good for that price, should not expect miracles either.
The premium, it is 500 euros, plus interest recess (fortunately for 500 balls) is finally more or less the same level as the TLM (the U87, well I do not know or ...) by against manufacturing is a little cheap , it seems that moving the connectors to pass omnidirectional cardioid, he will let you go, unpleasant ... Figure 8 .. ben there is not, "it is useless" dixit boss mic and mod ... I let you appreciate the level of professionalism.
So suddenly after having tested, I decided not to keep it to 500 balls and already two TLM, I returned and told me that I used to have nothing in a (fake) that the third will never sell as my TLM if (at least 500 euros).
But hey, a surprising streak appeared on the body of the microphone, as he has been removed and once the stand, not fall, handled with care .. blah blah ... And the funny thing is that it was not that at 189 euros, well ... word against word, I find myself obliged to take it, so nice the service (I'll spare you the names of birds , right).
If anyone wants a fake version of TLM 103 cheapouille, well I sell him 480 euros (yes with the famous stripe, you never know it may be lost)

13 of 22 people found this review helpful