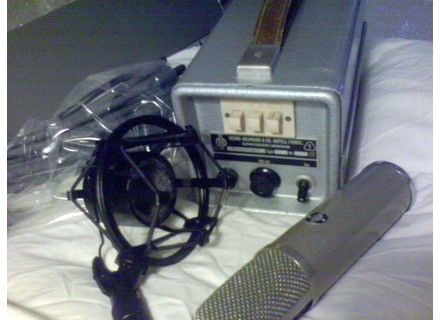 Neumann UM 57
5
The Neumann UM 57 is a little known microphone from the best microphone manufacturers in the world. Certainly not as popular as other Neumann microphones, the UM 57 is a large diaphragm tube condenser microphone. It's definitely only suited for use in the recording studio, which is the only setting I've used it in. The mic comes with it's own power supply since it's a tube microphone. We have one at the studio where I currently work, which also has it's own shock mount and carrying case.

While not on par with many of the other Neumann microphones, the UM 57 is a great microphone in it's own right. Perhaps it doesn't compare to the U 47 or U 67, but it does share the same capsule as the 47 and can be somewhat likened to this mic. While I don't believe that this is as good a sounding microphone as the 47, the UM 57 has a thick sound in it's own right, with a very tight sounding high end. I've used the UM 57 for recording a few different vocals, both male and female. The female definitely sounded better on this microphone, which could just depend on the specific singers more than anything. I haven't had a chance to use it for anything other than vocals yet. The UM 57 is overall a very good sounding Neumann microphone, which doesn't get much love because it gets compared to some of the other Neumann microphones, which are some of the best ever made. The UM 57 isn't all that rare, as I think you could find one pretty easily if you wanted to get your hands on one. The price is definitely going to be a lot less than most other Neumann microphones from this era like the U47, as it isn't as sought after or frankly as good sounding, but if you want a tube Neumann microphone on a tight budget, the UM 57 could just be the microphone for you.