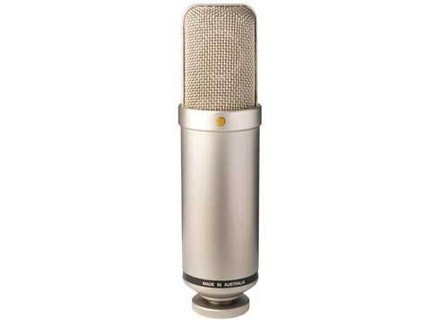 RODE NTK
5
It comes in a big case including puwer suply, microphone cable , power cable stand adaptor, the shock mount is optional I payd 60 euro for it wich is a steep price.

Very nice sounding studio condenser microphone, very sensitive picks op very much it can be an advantage or a disadvantage, depending on your stdio environement. I has a goldplated membrane, low noise.

plug it in your mixer or multitracker and sing, rap whatetver...

still works, but it is sensitive so you should handle it with care

I got it for cheap so that's why I love it I got a good studio quality mic for 300 euro, it isn't a neumann but stil does it's job

Used for 9 years now and it holds up over time. I have not tried to compare because it suited me perfectly for what I needed. The spectrum is present ... Small worries at the "p" "t" "s" is sensitive membrane despite the presence of a windshield in front of the cell. I usually put a low-cut, and the case is settled and a deesser with some very bright voice. Micro short upper mid-range for a good price.

RODE NTK
4
Microphone for home to take his rap voice. For specifications, see the reviews.

I bought a few hours ago and I've done a lot of struggling with.

Let us immediately: I have not taken any snaps in buying this microphone.

Compared to NT 1000, we note, is above all the virtual absence of background noise. The report noise / sound recorded is significantly better than the NT 1000. The NTK is also more balanced frequencies.

I did not like the sound high mid / treble NT 1000, so unpleasant bump my voice has a lot of treble components. Nothing like here, the base is more pleasant before working frequencies.

on the other hand, do not expect miracles! I immediately said that I only use the preamp of my soundcard (EMU 1820 M), which probably plays a role.

Say that I expected the heat, and a more open, or it is not really the case. Not a huge difference compared to NT1000, nor fidelity, nor heat, nor clarity. For now I'm a little disappointed.

I will change this notice after acquiring a preamp / compressor, which I hope will reveal the (alleged?) Heat lamp.

First edict after a few hours. As I read on sites in English, the sound is "tenuous". He looks a little tight.

At low, not much more than the NT1000, you really get close to the microphone to enjoy.

Bacbacou's review (This content has been automatically translated from French)

I bought it in January 2003, APRS've tried a weekend. I read trs content, it's a clear trs, Dfine and brilliant, but never aggressive. I use it on voice / percussions / acoustic guitar and it sounds good trs. I recommend quiquonque for this type of use. The only problem until it is supplied with carrying case and suspension, and that is expensive (€ 130) it is also heavy and cumbersome with the power supply (I deprecated for use nomadic). That said, it n (trs is not sensitive to noise vibration. I pay € 610.

Did you find this review helpful?yesno
»
Read the 7 user reviews on the RODE NTK »