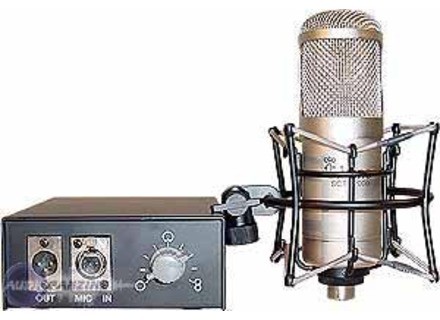 The T.bone SCT2000
5
See other comments for technical details.

I've had this microphone for a week, it does take an hour of pre-warming before you can use it - user's guide says 10 minutes min, but trust me this mic needs a full hour to reach its potential (obvious difference in sound).

The sound quality is mond-blowing for that kind of money, in fact I would expect this quality from a mic at least twice that price.

I must say I'm only used to condenser and dynamic mic, no tube mic used before, but the warmth of this mic is great for what I want to do. Can record guitars + vocals in one take without a pc, the result with a simple Mackie Satellite coupled with a Boss recorder is fantastic, guess what, I won't need to mix any of the acoustic takes, sound is spot on what I wanted!

Now the black spot: Thomann's service. It took ages for my order to be processed and although during Xmas time, 2 weeks processing is way too long as far as I'm concerned (especially since I did not get any update until it was actually posted).

Also you would expect a mic that fragile to be carefully wrapped, well I was seriously horrified by the lack of care taken in that respect (so much that I was expecting the mic to be dead on arrival).

Long story short: this is an amazing microphone, get it. But if you can avoid ordering other items from Thomann, pass your way and turn to Dolphin Music or Digital Village, used both last year and service was impeccable and items very good value.

I'll put a 9 here because that's the mic I'm rating, not Thomann (but you'll have to order it from them, no other way to get it as T-Bone is a Thomann brand - just ask for extra bubble wrap, trust me...)

SLIM-SHADY's review (This content has been automatically translated from French)

I USED THE depuit 1year
EC MICRO IS VERY VERY VERY IMPRESSIVE IN THE MEDIUM AND ACUTE presision REALLY NO WHEEZE LAMP DO NOT RIGOLE IT IS NOT THE STYLE TO THE LOW S HAVE IN CRAZY IN A MIX ON NOT NEED BUT SHE STILL FUCKING! !!!!
the beauty of this micro ;;;;;;;;;;;
the least in this microphone?
YA NA NO!
i rode a k2, RODE NT1A, NEUMANN TLM 103, U47 AND THAT I NEVER VENDRER
THE T-BONE IS CONNECTING WITH TLA 5051 V2 G CHANGING LIGHT THAT SOVTEC G REPLACE BY TELEFUNKEN 12AX7 / ECC83 RIBBED PLATES RADIO TUBES DIAMOND THAT MY SKIN OF LISTENING ....
WITH SEVERAL HOURS OF SETTINGS G REALLY NOT NEED DUN AVALON
THE PRICE OF THE MICRO AND REALLY NO JOKE WHEN I HAVE RECEIVED THE CRU QUIL I HAVE A PROBLEM Y DALY ON THE PRICE
IF I REFER THIS CHOICE?
I BUY THE FACTORY Uzine YES
Did you find this review helpful?yesno
»

The T.bone SCT2000
5
This microphone is a microphone large lamp membrane as everyone knows ...
RAS is a good start.
I am having trouble stitching on the microphone, it is pricked everywhere on the body of microphones, and just to one side yet he always does entrepos ... so I do not know not sure what to think.
So I'll repaint it may be because I'm the "costomiser" IAW which t Present in the forum on this microphone. I change all of this micro condos and I also put the mtalliques resistances ... icing on the cake and I will also change the lamp ...
I hte to listen to the result.

I use it for a few months.
For now I accuracy of all that I have used on guitars and a voice, but I have hte to test the deeper ...
I t pleasantly surprised by his heat against it must be mfier lack of treble, made a little MP3 exagre sometimes ... I just obviously but in the spirit it's a little fawn all over 15Khz there anything ... and at the same time it makes sense on a large diaphragm ... but when m am I expected better.
This is also why I tried the mod ...
Unlike what people say prcdants opinion, there is a proximity effect, but does not act on the bass, but the characteristics of the lamp transfers, so more compress, working the sound thick.
It is obvious by comparing it with a good microphone transistor.
I wait to try it on a bass or a bass drum.

I tried several microphones, but this is the first micro lamp I buys ... I compar with a microwave transistor 4050. AT a voice, it is quite surprising :dropoff window
_The Phase changes sometimes is often out of phase with the 4050 ...
_The Signal is totally rabott.
But at the same time it is an advantage considrable replaces a compressor taking ... It is a kind of natural compression decision, but it's a bit Avalon typ ...
I love the clear voice taken accuracy of all with the air, and I think it lacks a bit of brightness and definition in acute or acute extreme but ts often I fight the opposite excesses: too acute, which is just as dsastreux ...
I listen to hte that overlooks a grate amp in its saturated or even a bass amp, and also on an acoustic guitar after making the changes.

The report qualitprix is ​​amazing, you can not ask him to walk exactly like a U47.
A BMOL all the same: one is stung from all over the front of the microphone body, it is obvious that it is a treatment default ... But it is not I'm serious ... why not paint it pink or neon yellow like (just kidding).
The first one I bought I found Cygnus 200 per net. Even today, I just bought a second home Toto 288 with a coupon of 10.
As soon as I reois I think transform also conditon that the First transformation is conclusive ... so considering the price of the amendment, 30 micro, I dj taken all the components for the second ...
I shall have more that try diffrente lamps ...
Despite the few outlets that I did with, I achterais 6 well at all, as I would be 3 couples ... Given the rates I do not really prendais risks.
At the same time if I find the same price for a C12 clone, I prefer to buy a copy of the C12 ... matter of taste ...
Did you find this review helpful?yesno
»

muzikal's review (This content has been automatically translated from French)

The T.bone SCT2000
5
For the characteristics, everything said t lower. Micro Chinese lamp.

Search a microphone to the sound as natural as possible and dpourvu this gloss modern microphones in the medium-high hardness and high gnrant sibillance (voice made F / H).

The acquisition of a MK 319 has achieved this goal. If the medium - high medium is a superb musicality prcis see soft fat, the treble is attnu it though. Catches are lacking a bit of air. The correction of this spectrum has to do with a high-quality equa on pain of acute Synthetic. Under these conditions, with a good prampli (average output level of the microphone), the MK319 allows to compete with the tnors GRADE some voices, the high-medium and treble corpulent.

Passage micro lamp with TBS. The overall definition is better overall. The output level is more lev. Bel impact and thickness of the stamp. But under certain conditions, the high-augu medium (between 5 and 8 kHz) can sometimes avrrer harsh hair, nothing serious and without comparison with many small Chinese and Australian friends. It corrects the qua aisment if voice is supported on this spectrum. Finally, the lower medium can avrer a little too rough for proximity effect. Here again it is trslger.

TBS is provided originally a Chinese 12AX7. Following the opinion DPOS by Le-Petit-Alchemist, I changed the lamp for a 12AY7 GT. I confirm completely observations: high-medium is attnue and is much more pretty and sweet, while it does not seem as acute (at del 10 kHz) is lower, according to the info I distill my 8040. Finally, the lower medium is a little less loaded in proximity. Mutation Russia, this micro and wins acclaim.
I tried also a 12AX7 (more gain and harmonics, less sweet but better precision transient) and 12AT7 (like the 12AY7 but with less amplitude) home EH. The interest with TBS, is that depending on the lights, the sound color is changed. Multiple microphones in an amount, based on the record source. In addition, the lamp is very AIS change.

Another advantage: it does not dtimbre many off-axis. So that the singer can move a bit without really changing the sound (the opposite of a C414).

For the taking of an acoustic guitar, I find it a bit slow and too bulky coat. I prefer him a pair of C451 in SE3, faster and therefore more prcis. But equally depends played the style.

A BMOL: A premiermicro's tomb in the harbor: significant loss of gain and acute, parasites when turning the slecteur of slectivit (!). The lamp n'tait not involved.
Toto warranty, me have changed against a new one. Observation: the sound is not the same. Quietest and cot imprcis walls of serious and has attnu plusfaible proximity effect in cardio. It accredits much the idea that Chinese products do not prsentent a homogeneous quality. Therefore caution.

- Micro's report qualitprix excellent. For a low-end price, it attacks the mid to high range
-The Taken stamps are very musical and prcis without the caricature and drooling cot lamp
- Possibility to change the color by changing the lamp. Multiple microphones in one.

- Lower medium proximity effect a rough haired, slightly above medium hard sometimes but maitris withthe 12AY7 GT
- Weight (necessity of a sturdy feet)
- Average quality of Suspension
- Unsurpassed Quality of production
Did you find this review helpful?yesno
»
Read the 22 user reviews on the The T.bone SCT2000 »