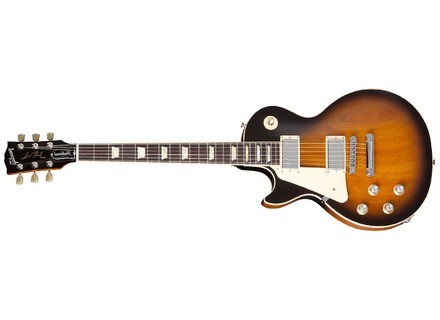 olivier61's review (This content has been automatically translated from French)

The neck is very nice. It is not painted and it slides really well. I had the idea that the Gibson Les Paul were hard to play well not really. It is very enjoyable to play except perhaps in very sharp treble, but it's done anyway. The neck is thin and finger placement is fine. I think even have progressed since I use it. Well it is relatively heavy but it is a normal Les Paul.

The sound is thick (it's said?), It asks only cruncher see more. I use a Vox AC15C1 and a Marshall DSL 5C and it sounds great on both. My favorite configuration is the marshall and a TS9 for solos (not all the time). I agree with the two previous reviews, the sound is more serious, more fat than other guitars I've tried and that's what I liked. Playing the blues-rock (ZZ Top ...) it's perfect. You can of course play with many other styles.

I use it for almost three years. When I bought it, I tried a strat, an SG 60's, a les paul 60's or 70's and a les paul studio. The price kept me (a little) but I cracked when I plugged. It really has nothing to do with his level. Being left-handed, I must content myself with what I find. Luckily the store had arranged some of which it models. This guitar is naturally distinguished from others. After there was traditionnal but with varnish, I did not even want to try it for fear of exploding even more my budget.
To talk about the price I got it for € 1,300. At that price it's really interesting. At a higher price, so maybe go on the varnished finish I think, see a standard, after .....