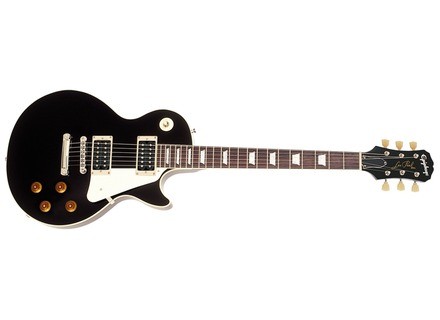 Epiphone Les Paul Classic
3
I've been playing for about 30 years, a little bit of everything rock, country, pop, alternative, etc.

Was looking around ebay for an Epi paul. Found this one for $200 used. Its about 5 years old I believe, but it's in really great shape.

I like the feel, I like the action, I like the look of it. It's a wine red with gold hardware. Really sharp. This guitar also has a lot of sustain which makes it sweet for old hair metal riffs that are overdriven.

There's a problem keeping the G string in tune. I don't know if it's the nut or the tuners, perhaps even the bridge, but its so sensitive its sort of a pain in the butt. Also, even though the guitar has some decent sustain, it's just not as heavy as a regular Gibson Les Paul, at least it doesn't seem so to me. Not that it matters that much, but to me that sort of tells you about the quality of the axe too.

Other than the wierd tuning issue and my comment about weight (which is probably related to the wood used or something), the fit and finish are pretty good. I'm not sure where these are made, probably Asia, but they're not made in the U.S., I'm pretty sure of that.

Overall, to get an Epi Les Paul for $200 that's only 5 years old and is in great shape is a good deal to me. It was the perfect present to myself. It looks good, plays nice, and sounds great. I'm pretty happy with it. Other than the tuning issue which drives me nuts.. need to take that to the shop to see what they can do.

Epiphone Les Paul Classic
5
Bought new at Ramus musik in Lulea, Sweden. Used to be 23 000 SEK but because of the inflation in the US, the price was lowered to 14 495 SEK. And THAT is the definition of a bargain! You could say it was as if a 2300 USD guitar was lowered to around 1500 USD.

Absolutely everything. There's nothing whatsoever that I can complain about. The tone, the look, the finish.. Hell, even the tuning pegs are wholly to my liking.

Well, there is one thing. I don't like the "1960" imprint on the pick guard. But that's just a minor aestetichal detail.

Pure high-quality gear. It's as if this guitar is some part of the master plan of God himself. And I'm an aetheist! The finsih is beutiful, the inlays are close to perfected and I could probably, were it not for the limited life-span of human beings, go on forever about how great this guitar is!

This is, without doubt, the greatest guitar I've ever played. Though my life is but a passing sneeze in the Universe, the magic of The Les Paul is eternal.

I love this guitar and its practically the only guitar i play out of my guitars. 1st of all the playablity is excellent. The neck is slim and VERY fast and very easy to fret. This guitar is great for fast exciting rock and for great classical pieces also. I play rock and classical guitar on this baby. The pickups are GREAT and give you incredible distortion when you want it. And also it stays in tune for practically forever! When it does go out of tune it BARELY goes out of tune. Anyway I can talk about this guitar forever but I can't.

The quality couldn't be better. First of all like all Les Pauls the body is two pieces of wood. The top is carved maple and the back is mahogany. The neck is mahogany and is a 1960s slim taper neck. The fingerboard is rosewood and it has faded pearl trapezoid inlays for a classic look. It has nickel hardware with a hardtail bridge. The neck pickup is a 496R ceramic humbucker which gives the tone plenty definition without feedback lik those aggravating single-coil pickups give. The bridge pickup is a 500T "Super Ceramic" which gives you bone crushing rock with extreme clarity and tone.

If you are interested absoluetly buy this instrument. It well suit you well for all purposes.

The weight and balance are perfect. The Grover machine heads are very responsive and it keeps it's tune.

I can honestly say there isnt anything I don't like, but I would say that about most guitars.

Next to the Gibson version, you can tell the Epiphone may not be as expensive, but it still holds its own, and feels solid. It can be handled confidently, without fear of too much wear and tear.

This is the right guitar if you want to play any kind of rock based music. It sustains well and handles like a dream. If you havn't got £1700 to spend on a gibson, get the Epihone (the only company liscenced by gibson to produce Les Pauls by the way). However do not regard it as second best, it's more than that.

This review was originally published on http://www.musicgearreview.com
Did you find this review helpful?yesno
»
Read the 21 user reviews on the Epiphone Les Paul Classic »