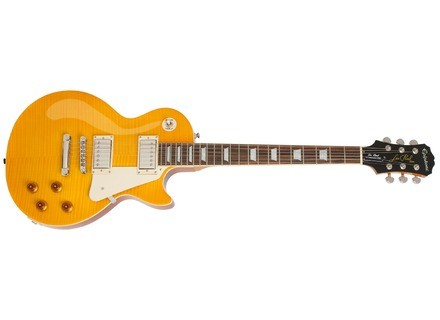 cc.torres's review (This content has been automatically translated from French)" Better than G. ...."

Super Channel for me fast and low Action - Not recommended for fragile backs (4.7 kgs) - access to average highs (like all LP) - you get a great sound LP with a slight lack of precision jump and average potato !

With microphones changed for Gibson Classic'57 and split, the knobs CTS, condos OrangeDrop, mechanics Kuzon and especially a "flatness" of the frets done by a luthier: it was better than a real LP Standard Gibs (comparison made eyes blindfolded) for a cost of 700 Zorros (box with photo) instead of 1700 to 2200.

Purchased upgraded in 01/2012 with the project to achieve GLP Standard outside chaotic settings (strings, fretboard, frets, bridge) is a perfect violin. Of curls on all sides, bending the handle "almost inverted" hurt granted bridges and strings uncertain origin .... Paasage luthier in the imperative.
With the right pickups, and more "splitables" and electronic and mechanical quality is at the same level That a scratch 3 times more expensive. The downside could be the table "plating" maple instead of a massive table, which should give less severe and less sustain! .... The result is again surprising bass are present (and good), but also there is a 50% longer sustain. who knows why?

Factory setting excellent, the bridge can be a little annoying but not prominent
The ergonomics bah c is a les paul so it weighs a bit but let's be serious c is not a washing machine no longer
easy access to acute contrary to popular belief. C is not a shredder but blues solo top is c.
Regarding the sound I have not yet tried it on my vox but an old stagg 20 watts
as you say that I had heard the sound that way.
More accurately from test vox

Then there is
I don not clinging to old micro epiphone beautiful but there has two humbucker probucker (version epiphone Burstbucker of her big sister) that offers a variety of incredible. its clear and I repeat c is a stagg I just play the micro bridge split, with one of her red hot but warm acute treatment with even a crunch quality microphone offers a generous range
whola lotta love in neck no problem here that pretty dream guitar

today
day before I had a squier strat, sg coxx one (excellent as this one) a squier telecaster p90 2 (a killer except the handle) and I still have a ibanez montage 650
(Versatility, but micro electric too bright and a bit too low).
What I like most all finishes to mechanical grover via microphones.
For 350 € I think that we can hardly do better.