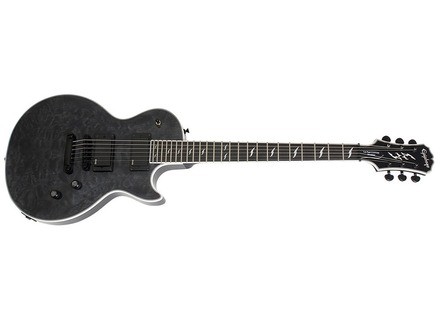 Epiphone Prophecy Les Paul Custom EX
5
Epiphone is Gibsons budget guitar line. Recently Epiphone has been putting out their own unique guitar models. One of these lines is the Prophecy guitar line. The Prophecy line has a few guitars of different shapes but they all pretty much have the same basic features.The Epiphone Prophecy series is a really nice line of guitars from Epiphone. These guitars have a real metal attitude to them. All the guitars in the Prophecy series feature 24 fret ebony fretboards on special satin finished necks with EMG or super hot passive pickups. The necks are nicely bound like on custom models They all have cool quilt maple tops and special inlays. This guitar is a Les Paul shape but with an extended fretboard to have the 24 fret neck. This model has active EMG pickups with an 81 in the bridge and 85 in the neck. The controls are simple it has a master tone and master volume control and a 3 way toggle pickup selector.

With the 24 fret neck on this guitar it does not do any favors with the upper fret access. The body still joins the neck at the 17th fret on this guitar so the upper frets are even harder to get to. The speed taper satin neck is nice and is a good alternative to a completely raw neck like you would get on a Zakk Wylde signature guitar. The ebony fretboard with the jumbo frets is really nice under you fingers and provides a good action once setup. The tune-o-matic bridge is locking so it will not fall off when you are changing strings. This is something that many Gibsons do not have.

This guitar sounds great with the EMG pickups. It sounds like the real Zakk Wylde guitar. The 81 in the bridge has been an iconic metal pickup for decades. It has a high end crunch and distortion that gives it clarity no matter how much gain you are using or how low you tune. The 85 in the neck is a great pickup too. Since the neck pickup is pushed farther back it will get more bite than a normal neck pickup. It has a more fuller sound than the 81 so in the neck position you can get fat lead tones. The 85 is also good too in the bridge. With EMG's quick connect system you can easily swap these pickups position without soldering anything. The 85 in the bridge produces a super thick tone and cleans up better than the 81. Speaking of cleans if you do the 18v mod on the EMG's. With the 18v mod you run the pickups on two batteries instead of one. This provides a more organic tone with more headroom. This tone produces better cleans than stock EMG's and clean tones are usually the weakest part of the EMG sound. The 24 frets expands the tonal variety you can get with the guitar.

I like that Epiphone is putting out some of their own designs now. If Gibson put out this guitar it would be a few thousand dollars atleast. With Epiphone putting it out its very reasonably priced. The playability is great with the satin neck and ebony fretboard and the tone is great with the active EMG's something Gibson is reluctant to put in many guitars nowadays. If you are looking for a reasonably priced Les Paul that can really rip this guitar is in a class of its own.

Kalmageddon's review (This content has been automatically translated from French)

It all smells of good quality!

The handle is describable in one word: AWESOME! In fact, I test the dj Gibson Les Paul Supreme from a friend (what killing at apssage) I Drout by its thickness, which ignores me up when habitu my Start. But the Epiphone was hard because this LP has a superb round trs comfortable, neither too fat nor too thin. Impeccable!

However, Access in acute ... Well, we re not a Les Paul is trsmdiocre. The thickness of the guitar to go tickle prevents frets Most recent internship, I actually raises the question of the usefulness of having been 24 since I was galre reach 22! In contrast to everything else, this skyscraper is impeccable!

Ct form, ben LP is like it or not, I fell in love with me but look at me = e) The weight is more than my lev Start, but not normment, you can play for hours without tiring standing by against the ds that loose, it pitches down, watch out if your strap has large holes, the guitar bite dusts ...

To play up, it is impeccable, having said that if we train sitting on a stool, the Les Paul is not the most comfortable: the heavy rear, the rounded shape that will fit in the ratings ... Sat down to play nothing like a Start! But hey, we are rockstar, play up!

Ct rglages, they are easy to find for big sound!

If the sound of music suited my style? What better way to a big Metallica fan that I am a guitar up in the EMG?

The sound, made more than two weeks that I have this guitar and I still drool! The 81 is just plain be a little feeble, but it is a saturated KILL! As for the 85, beautiful in the clear, incredible sustain and trs saturated fat is like it or not, I like! Behringer GMX210 60W a couple, I was told that c'tait not an amp but I see no case against him, he has a beautiful sound, and with the Les Paul sounds Metallica released on their own !

For crystal clear sound, FTAs, but it says it is not meant to, in the clear 85 dlivre a trs trs and its pretty powerful, the 81 is a bit feeble in the clear but still pretty trs when it is saturated at a rgal is bold, it's hot, it's nag, but still devilishly prcis. What more?

Harmonics are a bit difficult to identify, at least for me who used my Start, but once they have been on the loose more!

As mentioned above, was just over two weeks that I have.
What I like most is its face, its sound, its playability, and price! I like a lot less comfortable when playing sitting, but must come from the habit of Start, APRS used to it.
O The day I bought it I did not even try, I knew that the c'tait and I liked it, and indeed I was right . That said I tried to scratch and I must admit that my favorite fall (hopefully) on the one I possde!
The ratio quality price is probably its biggest attraction. This is a killer for ONLY 600! Ingala a quality that price the sound worthy of the greatest, a good finish ... trs

This choice is again without hsiter, buy eyes closed for lovers of big sound!