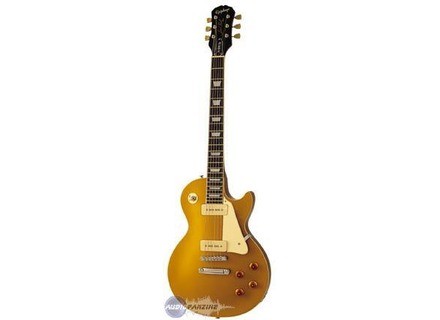 Epiphone Les Paul '56 Goldtop
5
The color is a cherry sunburst, it is a plus top (100$ worth of paint!) I play all kinds of music, i have been playing for about 3 years

I aquired this guitar from guitar center in Naperville,IN, i paid 467$ (with a coupon)

I love the action, humbucking pickups, action, look, and just about everything about this guitar, but especially the sound of the alnico pickups, and the action, plus the fact that it has 4 control nobs, and the tune-o-matic bridge

I dislike the factory strings that came on it, I would suggest replacing them with Gibson VR10s, or Gibson les paul strings, also the nobs get wobbly sometimes, and the input jack was a little loose after some use (just tighten them up with some pliers, and it will stay)

It is a very good instrument for the price, it handles anything from Hard rock, to slow christain chording music, overall a WONDERFUL instrument, and the set neck is wonderful, plus the tuners are grover, so they have no problem with staying in tune

Overall this guitar has great everything after some minimal modifications, if you are ever looking for a cheap genuine paul, or just a great overall intermediete-pro guitar this is exactly what you want


The design of this guitar is actually included normal, but highlight the impression of classical and blues on our performance in my opinion. If at first glance in terms of color, for Guitar Gibson Les Paul original, wrapped in brown wood with grooves on the body who showed classic impression. This guitar uses solid body (which was originally made of mahogany) because the les paul wanted this guitar has sustain 20 seconds. Of course, for wearing the solid body, making this guitar almost 2 times heavier than the guitar in general. There are two humbucker pickup selector switch with three controllers plus two volumes and two tone controls.

There's another hallmark of this guitar, ie the distance between the fingerboard and frets are small, it is easier for us to play fast and melodic melodies that require long range. It has side effects, namely those who fingered big bit difficult to use ... I use this guitar and was lucky I did not see a significant constraint because my finger 'tapering' hahaha.

The design of this guitar may be plain indeed, but the results sound issued truly remarkable in my opinion. Sustain a long a hallmark of this guitar. The combination of solid construction with high beroutput pickup makes it perfect for high-gain sound that has long distorted and shrill-toot (maybe this is the reason why this guitar is the most sought after by melodian, including me ^_^). Adjectives that might describe the sound output Gibson Les Paul guitar might like this: singing, ringing, stinging, swinging, and 'gunslinging' hehe. This makes the guitar Gibson Les Paul as my first favorite guitar as a melodian.

My history as musician:
well i don't have much to say, i just an ordinary man who loves playing guitar. Sometimes i perform on the stage but it doesn't my real job. I have playing music for 6 years, and guitar 3 years. my friend say i've got some talent but i think it maybe because i just frequently training.
I play guitar and i am a melodian. i love classic rock so much but sometimes i playing from pop until metal hehe

hmm... i don't buy it. i just sometimes go to music store and try to play guitar. but i can make this review because i sometimes borrow it from my friend and use it for perform. well i am not a rich man haha

it's sound is so beautiful!!! i love it so much, it's so smooth too. a simple way to describe it: ultimate guitar ever!
i'd love so much everything on this guitar except one...

just one, this guitar is so heavy... although it makes longer sustain. yeah every things have disadvantage...

it's very solid and strong too. i give score 10 from 0-10 for it's quality. it's just perfect!!! i never see other guitar that exceed gibson les paul

Advantages:
1. Has incredible sustain.
2. The smaal distance between the fret makes it easier for us to explore the melody.
3. Give the impression of classic and blues in our performance.


Weaknesses:
1. Has above average weight.

my final comment: the most perfect guitar i've ever seen...

Epiphone Les Paul '56 Goldtop
5
I've been playing guitar for 2 years, self-taught, originally playing metal style stuff but quickly got into prog rock and contemporary stuff like blues, Singer/songwriter kinda stuff like Tom Waits Dire Straits and Bruce Springsteen. I'm in a prog rock band mainly playing keyboards but sometimes I have to play guitar so I bought the Goldtop (which I had been admiring for a while) to replace (or add to) my Ibanez RG.

I can't find anything wrong with it at all. Fresh out the box it was in tune, and it has stayed in tune. It's not as heavy as you might think and is very very nicely balanced. I love the colour and the P90s are the most versatile pickups I've ever played with. With the four control pots available you can get a nice variety of tone, especially combined with your amplifier's tone controls. I removed the pickguard soon after I got it, just out of preference and it looks very nice both with and without. The best thing though, is that it came fitted with Grover tuners instead of the cheap plastic green ones they normally have! this was a nice surprise. The headstock is a little plain but who cares!?

I saw someone else state that when switching between pickups the rhythm one gave no sound. I had this the first time I switched but then the sound came in and it has stayed there. No problems!

Quality is excellent - it is sturdy and solid, with no loose parts. My Ibanez has a very loose input jack but this one is tight and well fitted. The control pots are perfect and the neck is straight and true, and very well set in. The finish is beautiful ALL OVER.

Excellent guitar, highly recommended. I've never played a Gibson but this thing probably comes damn close, because its the best guitar I've ever played. It's a shame Epiphone don't do a standard LP in this colour because I would have liked to have the traditional Humbuckers. But after trying out the P90s, they easily match the Humbuckers if you find the right setting! Highly recommended, I'd have payed twice what I did for it.

Epiphone Les Paul '56 Goldtop
1
i bought this guitar used at a pawn shop for $250 when i was young and stupid.

Well, it's an ALRIGHT beginner's guitar. not bad for learning. And it looks actually pretty nice.

wow, where do i start.

2 the action is too high

5. the balance is way off

6 its very easily breakable. you would think for something so heavy that the construction would be pretty solid....NOPE!

7 it comes out of tune every 5 seconds.

well like i said, it's too heavy. and it sounds bad. and its a little short. and the pickups wobble. and parts keep falling off (the nut just fell off during play once, and the toggle switch came off in my hands while switching. plus the tuner for the G string snapped twice until i finally replaced all the tuners with Grovers)
this thing just keeps falling apart.

Bottom Line...please never buy this guitar. It's been nothing but a problem for me. Unfortunately i've been forced to gig with it a few times...and i always wish i hadnt. this is just a REALLY bad guitar. like REALLY bad. like Rosie O'Donnel in a swimsuit bad

This review was originally published on http://www.musicgearreview.com
Did you find this review helpful?yesno
»
Read the 39 user reviews on the Epiphone Les Paul '56 Goldtop »