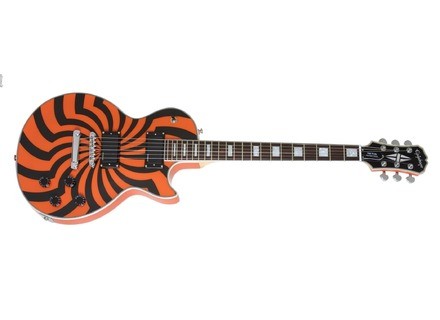 Epiphone Zakk Wylde Les Paul Custom Buzzsaw
5
i saw this guitar on the epiphone website and i had 2 have it as soon as possible,but when it eventually came out it was rather expensive so i waited a while and then ordered on mail order for about £450

as soon as you open the box you can see that this is a class guitar,although it is made by epiphone and costs under £1000 it plays and feels like a million dollars,the action is perfect for fast solos,and the maple neck just makes for easy playing.the pick ups are mean and give of the fattest tone i'v ever heard.when i play it through my marshall half stack it gives of a classic tone that is recognisable in so many ways to zakk wylde.it pops and squels perfectly and gives the tone only zakk can make

its not a gibson.there is nothing bad i could say about it really.

the quality and build of this guitar is awsome,it is beautiful in every way,from the maple neck to the bound edges of the body to the mother of pearl inlays.i have had this guitar for nearly a year now and i have not had one problem with it.it plays 101% all the time.

if you like zakk wylde and les pauls go out and buy it,its worth every penny.

Epiphone Zakk Wylde Les Paul Custom Buzzsaw
5
I got this guitar from Richies Music Center in Rockaway New Jersey and this guitar ripps! I was looking around for a new guitar and I had a Kirk Hammet 503 but I was gettin' tired of it and I traded in the kirk for it and I ended up paying in total about 745 minus the guitar of course.

I like that the guitar is very ballsy and has a great feel to it. The maple neck is awesome. It goes with out saying that I like the paint job, but mine is a factory second and has a little thing on the back but, I doesn't matter.

I don't like the Fact that when I when out looking for a ZW LP that All I could find were factory 2nd's. I just love everything about the guitar.

It is a hard rockin' kick ass Axe!

If you wanna throw down hardcore, then this is your weapon of choice.

Epiphone Zakk Wylde Les Paul Custom Buzzsaw
4
Many people do not remember that Zakk had more guitars than the Bullseye Les Paul that everyone remembers. He played a few other designs in the 80s but the Bullseye was the only one that stuck around. Now Gibson has Zakk using other designs so they can sell more guitars. One of the new designs has an orange and black buzzsaw bullseye motif on it. This guitar is the Epiphone version of the Buzzsaw Zakk Wylde Gibson. The main difference with this guitar is the electronics and some of the wood selection. The guitar still has a mahogany body and a maple neck but the fretboard is made of rosewood instead of ebony. The electronics are still EMG pickups but they are not active EMG's. They are EMG's budget line of passive pickups which are pretty poor but better than what this guitar would have come with. The guitar has Zakks Buzzsaw motif and after all these mods it is your typical Epiphone Les Paul. Each pickup has its own tone and volume control and there is a 3 way switch for your pickup selecting.

This guitar has all the same playability enhancements as the other Epiphone Zakk Wylde guitars. The raw neck helps make the neck a bit faster because with a finished neck you can get a sticky feel. If you are use to modern guitars with thin necks the Les Paul neck will be very big for you. Because of the set neck design there is a large neck tenon and joint. This can make the upper frets hard for some people to reach because the body essentially joins the neck at the 17th fret. After the 17th fret you are reaching around the body to get to the frets. The tuning stability is good because there is no tremolo. The quality of hardware Epiphone uses is not that great. I have had problems with the input jack unscrewing itself and things like that.

Being a budget copy the electronics are lower end versions of what the Gibson version has. The passive pickups are built to emulate the tone of the 81 and the 85 but it just doesnt quite get there. The bridge pickup is tight like an 81 but it doesnt quite have the same top end sizzle as a real 81. The neck pickup is closer to the active version than the bridge. The 85 naturally has a warmer more passive sound so the passive version does not differ much in the sound department. Since these pickups are EMG's they have the quick connect wiring system so you can easily swap these pickups out with a set of active EMG's when you get the chance and this guitar will really rip then and you will have the true Zakk Wylde sound.

This guitar is very reasonably priced with only a few differences. The Gibson version is thousands and thousands of dollars. With an expensive guitar like that you would almost be afraid to play it. With this guitar it is cheap enough that you can play it out anywhere you want and not be afraid something will happen to it. With a 200 dollar pickup swap you will have pretty much the same guitar as the Gibson for thousands less. If you are a Zakk Wylde fan and cant justify playing thousands of dollars for a Les Paul Custom this Epiphone is a good option.