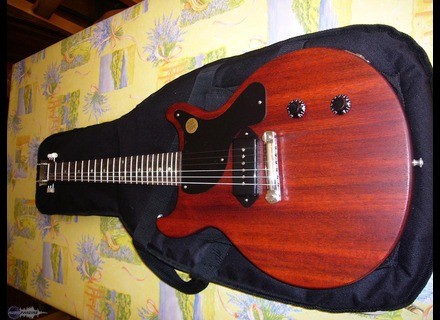 Gibson Les Paul DC Junior Faded
3
If anybody wanted a decent double cut Junior, they'd probably start looking into the faded series. The faded series was a line that Gibson had to help cut down on costs but still deliver quality tone. The guitar features a mahogany body with a maple top, mahogany neck with a rosewood fretboard, 22 frets, trapezoid inlays, pickguard, binding, hard tail bridge, one P90 in the bridge, one volume and tone tone.

Les Paul Juniors aren't generally my thing. I tend to find them a bit thin sounding, and they lack the overall aggressiveness that the normal Les Paul has. These faded series are decent, but there are some dogs out there, so you have to keep that in mind. The fretwork was decent on this, but it could have used a nice fret level. The nut was cut properly, so no issues there. The guitar was balanced decently, unlike a lot of the SGs that Gibson tends to make. The finish wasn't bad, but I would have liked a few more options. The rest of the guitar was decent, albeit a bit bare overall.

There is only one P90 pickup in this guitar, and it's very limited in the overall tones you can get. I tend to find single humbucker pickups to be a bit lacking in versatility, but at least they can be split and/or wired in different formats to get different tones. With this, you can't really do much as P90s are single/dual conductor pickups. The pickup itself was decent, but it was nothing mind blowing. I can think of a few other P90s out there that sound better than this particular one. The good news is that the guitar was at least resonant, so there were no real issues with the actual guitar itself.

If you're looking for a Les Paul Junior on the cheap, these can be a pretty decent buy. I don't exactly recommend them, but that's because I'm not a huge fan of Juniors to begin with. They can be decent players, but tone wise, I find that a P90 equipped Les Paul just blows these out of the water in every possible way.
Did you find this review helpful?yesno
»

Gibson Les Paul DC Junior Faded
5
If I'm not mistaken this is a reissue of the legendary Les Paul Double Cut, which always makes me dream ... Beautiful comes from America, Gibson USA obviously.
22 frets
Wraparound bridge
A very pleasant and comfortable handle that will appeal to many without a doubt guitarists.
One P-90 microphone with a volume knob and a tone.

The handle is very nice, the guitar is a faded model therefore unglazed, which makes it very comfortable to handle my taste. So much so that it is on this guitar I play the most right now.
The guitar is very light, ideal if you're not a beefy big as me and the scene if you have a set of very active scene.
The shape is a matter of taste, I bought this guitar because I am absolutely crazy about Junior DC. If this is the guitar that makes you dream like me and you do not have 2000 euros to make, go for it! She is beautiful, the wood is beautiful you can see the veins, it is a beautiful red color and is much more beautiful in person than in photos.
Because of the "double-cut" access to the treble is very easy, so if you're furious soloist at heart and that you are enough 22 frets this guitar can also be for you.
Easily get a good sound, in fact it just plug into an amp worthy of the name. Already empty guitar sounds good and sustain quite correct.

I bought this guitar to play punk rock in two different groups, and yes it is quite suitable for this use. As singer, and if in addition you have to jump around I do not have much time to worry about the settings and this is what suits me. One branch, we put the knobs to bottom and left the bim! (Well not always I admit, playing with tone can be interesting). And I do not expect versatility from this wonder but it turns out that I also used to play jazz or funk, and even sounds! Very pleasantly surprised.
Its really a very response as a function of the guitarist and the attack. I found the micro P-90 very expressive and the clean sounds gloss wish (if you have the amp that follows), very strong slap if you attack. I love the saturation when we go inside to clean, to ska and reggae really good.
Crunch sounds are biting at will, really amazing lamps on a Marshall crunch. Amateur big distortions I saw my judgment after tasting such flavors. Really a guitar with character, when pushing the gain you get in an electric thunder with a monstrous potato! No, really, the first time I used rehearsing a Marshall I was hallucinating by this really crazy sound!
Large distortions are however not his chosen field, and other metalhead purists go your way because the "buzz" of the P-90 large saturation will not be appreciated and desired precision cutting and will not be waiting for you.

I've always tried to have a Junior DC but galley galley, as reissues like this model from 2006 are no longer for sale. Fortunately there is occas' because I could not wait until Gibson decided to redo a series.
What I like most about this guitar is his personality, because she has so! I played a lot of guitars "soulless" and with sound that gave me almost no sensation but now it lives! There is something I can not say anything, completely in love. For the price it really is a killer, I do not know how much it cost new, but for 600 euros I got out of my pocket very satisfied.
I have this guitar since 3 months and I use it all the time, maybe it will me but I think I have acquired a guitar to accompany me throughout my life it will always be a place of choice for other. So yes I do it again this choice without hesitation if the need were.

grosrem's review (This content has been automatically translated from French)

The handle to a profile rather then late 60's. It's really fun to play, though a bit harsh. There is no patent, like any guitar for that matter.
It is a double cut shape, so access to treble is super easy, although in my case it does not matter.
This model is really thin and light, I think it's great fun to play, but it's a matter of taste.
Its level, we get easily a good sound, maids must love the source. There is only one p90, one volume and one tone (which is not a effiacité crazy), so it sounds great, but it only sounds like that.
A test then.

I play more punk / hardcore / rock sound and I agree completely.
I use mainly saturated, even almost exclusively.
The p90 has a typical sound, which I like and that really the body in full.
In his clear, I appreciate the slight overdrive happens when I attack hard.
on the other hand again, this guitar is anything but flexible.

I use this guitar for a few months, I especially like its simplicity, its weight and sound.
The only fault I see is the mechanical, which I find ugly and not very accurate, and I would change then surely one day or another.
I tested a lot of models on the whole, be it telecaster, les paul, explorer, Duesenberg or lag, which full of things very well, but I hung on to one of its simplicity and handiness .
Faded is a series, so no summary varnished finishes, but it gives a style on guitar.
I bought it new 730euros for the gibson is rather a good price, I find the value for money honestly.
As I only need a simple guitar with a sound that hard, I think it's an excellent choice.
Did you find this review helpful?yesno
»