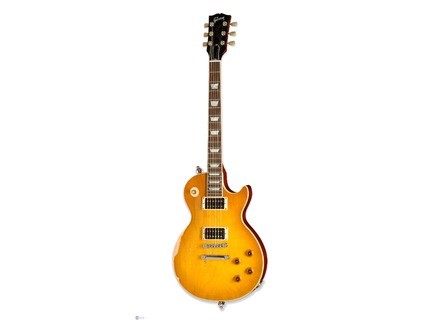 Gibson Slash Les Paul Murphy VOS
4
This is basically the same as a regular Slash guitar, albeit with a VOS finish and a few other minor things here and there. Then again, most of these Les Pauls are that way. The guitar features a mahogany body with a maple top, mahogany neck with a rosewood fretboard, 22 frets, trapezoid inlays, pickguard, binding, hard tail bridge, two humbuckers, two volumes, two tones and a three way switch.

The lame on this one wasn't all that strong, actually. They're generally solid flames, but I've seen PRS and other guitars with better ones. Even Jackson can have more intricate flames. Then again, it all depends on what you're going for. The nut on this was cut properly, and I had no issues with tuning. The frets were dead on, and the edges felt great. I really dug how this guitar played, and it had a nearly perfect weight, weighing somewhere around 8 to 9 lbs.

Slash is one of the icons when it comes to Gibson guitars, and this VOS finish model is an awesome "inspired by" guitar. I'm a huge fan of the VOS finishes, and I really wish that all the Gibsons came with them as I honestly feel they both sound and look better. It could just be psychological, but whatever. One thing I'd recommend would be replacing the pickups, but that's just me.
Did you find this review helpful?yesno
»

Published on 03/29/08
Gibson announces the availability on April 1st, 2008 of its limited edition "Inspired by Slash" Les Paul.