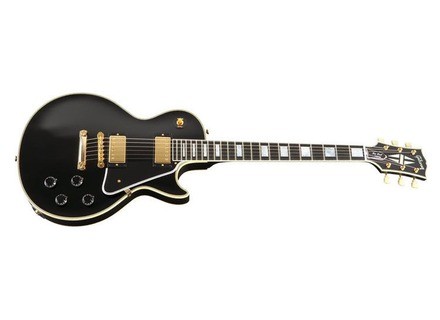 Gibson Hot-Mod Custom Exclusive
5
Back during the time when Gibson first started offering their PAF pickups, they had a mod called the Hot Mod. Basically, it was a conversion to put the newly produced humbuckers into your Les Paul. It was a pretty popular mod, and it became standard later on. The guitar features a mahogany body with a maple top, mahogany neck with an ebony fretboard, 22 frets, trapezoid inlays, pickguard, binding, hard tail bridge, two humbuckers, two volumes, two tones and a three way switch.

The guitar was put together great. The inlay work on this was done nicely. There were no fillers or anything like that in there like I've found in some lower end Gibsons. The nut itself was cut properly, although the string gauge that was put on this guitar was wrong. Someone put 11s on it, and they were a touch too big for the nut on the bass side. The fretwork itself seemed to be great with no annoying edges slicing your hand or uncrowned frets. The 12'' radius is pretty nice, although I generally prefer something a touch flatter. Upper fret access is the same as every other Les Paul out there.

Normally, Gibson Les Pauls are very thick sounding. This works great for most styles of music, but sometimes it lacks a tad bit of clarity for certain genres. The ebony fretboard on this guitar helps add some sizzle and bite that allows the guitar to cut through the mix without sounding thin. I'm not a fan of the pickups, so I always replace both those and the pots. This really opens up the guitar and makes it not only more aggressive but more versatile as well. However, the stock pickups in this aren't too bad for that real old school PAF kinda sound, and it absolutely roars through a Marshall.

Given the price of these guitars, it's kinda hard to justify it over a normal Les Paul Custom. However, if you look beyond the price, you'll find that this is a very solid guitar. With these guitars, you can buy them used no problem as the fretwork, finish, nut, etc. are generally pretty solid with few issues.
Did you find this review helpful?yesno
»