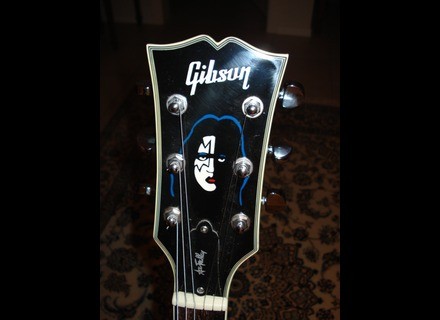 Gibson Les Paul Signature Ace Frehley
4
This was actually one of the biggest selling Les Pauls ever during a period of time. The guitar features a mahogany body with a figured maple top, a mahogany set neck with a rosewood fretboard, unique KISS inlays, 22 frets, a tune-o-matic bridge, three humbuckers, two volumes, two tones and a three way switch.

The guitar was put together nicely, and that's a good thing for Gibson as their QC has been a bit iffy at times. The guitar had a properly cut nut, and as everyone knows, that's rule #1 for staying in tune. The frets were nicely leveled, the nubs were done correctly and they weren't sharp at all. I was able to get some pretty low action on this guitar despite it having a 12'' radius. Access to the upper frets is the same as every other Les Paul in that it sucks pretty hard. The neck joint gets in the way, but you learn to live with it as that joint is an important aspect in tone.

This guitar has three DiMarzio Super Distortions installed in it. Considering how high output these pickups are, that's pretty insane. The Super Distortion in the bridge through a Marshall is the classic KISS sound. It nails that overdriven Marshall sound with ease. There is a slight vintage-ness in the bass, but it works out nicely for this kind of music. Cleans suck, but oh well. The middle pickup is absolutely useless. No clue why he ever added one. The neck pickups has this ridiculous "push" going on, but it sounds pretty cool. Still way too hot, but I guess it works for being heard.

This is probably one of the least versatile Les Pauls out there, but it's totally killer at what it does. However, it's way too overpriced for what these things go for. If you want something similar, just buy a standard Les Paul and install some Super Distortions in it. You'll be much happier.
Did you find this review helpful?yesno
»