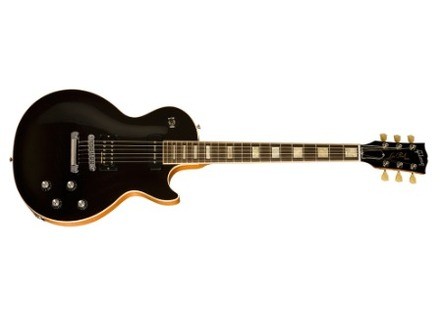 Gibson Lou Pallo Signature Les Paul
4
Lou Pallo was one of the Late Les Pauls good friends. Lou Pallo worked with him at Gibson and for many years played in a band with Les Paul who still played a weekly show up until his death. The features on this guitar are quite unusual. There is single ply binding everywhere but the headstock. The neck is rosewood but has the block inlays from a Les Paul Custom. The large block inlays are my favorite inlays that Gibson puts on their guitars. It has chrome hardware instead of the nickle or gold so it is more resistant to tarnishing. This is something I think all Gibsons should have. The back of the body and neck are finished in a natural finish which is cool. There is an unpotted Gibson Dirty Fingers pickup in the bridge and a P-90 in the neck. So you have a humbucker that is as noisy as a single coil and a single coil that sounds like a humbucker respectively. There are two volume knobs and two tone knobs with a 3 way pickup selector.

This guitar is heavy like an old school Les Paul, it is nearly 10 pounds. There is no chambering here. The neck is kind of inbetween a 50s profile and a 60s profile. The 50s profile is commonly referred to as the baseball bat neck because of its huge size. The 60s slim profile is the preferred shape among Gibson and it is found on most of Gibsons non Les Paul guitars. The fretwork on the top of the line Gibsons has gotten really good recently. It use to be pretty hit and miss for such a big company. Gibson implemented use of a PLEK machine. A PLEK machine is a machine that uses lasers to level the frets on the guitar to within .001 of a millimeter. With this process the frets are smooth and level and this lets you get a great action. I wish Gibson would use stainless steel frets on the PLEK'd guitars so this factory fret leveling would last forever.

Since this sucker is a old school non-chambered Gibson you get the rock solid Gibson tone you are use to. The pickups in this guitar are quite an unusual choice. In the neck you have a 60 year old single coil design and in the bridge you have an 80s pickup liked by punk rockers. At moderate gain and volume levels each pickup can sound good at its own thing. This guitar is like 2 different guitars for two different people. The mellow P-90 in the neck is good for jazzy tones and classic rock tones. Of course it is not very high output but the P-90 single coil bite helps add clarity to the sound in the neck position. One of my favorite guitar player use to use the Dirty Fingers pickup. John Sykes' Les Paul Custom had a Dirty Fingers in the bridge for many years. The pick attack on the Dirty Fingers is rediculous with some amps it can hurt. The output is really high for an old Gibson Pickup. You can tell it is from the 80s when you crank it. This pickup can make any guitar sound like its made of solid maple.

With only 400 of these crazy guitars made it is sure to be a collectors item at some point. By then people probably still wont know who Lou Pallo is but they will see his guitar and think this guy probably had an interesting personality. With the pickup selector in the up position you are ready for your jazz or classic rock gig. With the selector pointed down you are ready for your punk rock or Whitesnake tribute gig. If you are looking for a rare Gibson that is not as expensive as some other not a rare Gibsons this guitar is a solid piece you should check out.

Published on 12/22/10
Marrying the tonewood combination of mahogany and maple, the Lou Pallo Signature Les Paul offers "classic Les Paul sustain and resonance, with a little less of the weight thanks to some strategic bod…