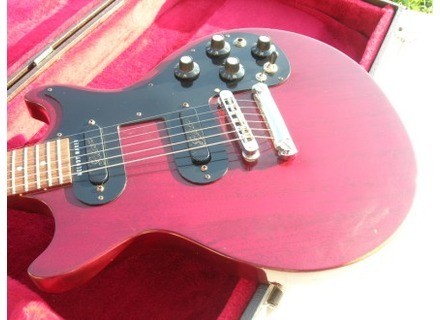 Latruite's review (This content has been automatically translated from French)" Versatile"

After being produced from 1959 to 1971, the Melody Maker was relaunched in 1977 and remained so until 1981. In 1977, Joan Jett with his famous song "I Love Rock'n Roll" has revived the days Rock solid body centered or Punk!
Flat body with doucle cut as SG (more rounded as LP)
Despite that this is light Gibson (mahogany body and neck); rosewood fingerboard.

Channel rather flat and wide (I did not report radius ...)
It is versatile: two simple microphones very powerful, very subtle tone of knobs.
In the clear is on the tele bridge pickup and the Les Paul neck pickup.
Tune-o-matic, mechanical Gibson.
Very good access to acute as a SG.

In the clear is on the tele bridge pickup and the Les Paul neck pickup.

In disto is very interesting because bluesy up fat.

I play on a Blackstar HT5R tube and it's quite nice.

Good vintage scratches and little recognition is a shame. It is not a violin worthy of the best Gibson (Custom etc.). But worth the trip especially for € 1000 or less. What Gibson did you good for that price?
Did you find this review helpful?yesno
»

SebCK's review (This content has been automatically translated from French)

Beautiful brown / red musty vintage (it was originally what color? Lol)
The body looks exactly like any other ringtone maker I have ever seen.
It would be closest to a HOFNER colorama both its form and easels.

The handle has melted in my car during a heatwave on the way to a ball.
The neck is very flexible and slides are simple to perform because the strips are very thin.
Guitar platform that does not follow the lower abdomen, but not unpleasant.
Mics blow a little, but the sound is powerful and very fat.

It's fine for rock (rhythm, chords) and the musette (dry).
Less good for solo (or so it's my foot?)
Used with an amp Roland JazzChorus 70s.
The sound could be better but powerful distortion.

My first electric guitar inherited from my father who was bartered against his SG that had the handle broken.
At the time, it cost 4000 or 5000 francs which is already a bit expensive.
It is a model I like a lot because I never found the same or even online encyclopedias on guitars / gibson, in my view it is unique.
It takes a little to the MM62 and 64 both double cut, with a color SG ...
In short, it's vintage fashion!

I do not play it, I will send maybe in the workshop to have it refinished Gibson because the handle grip viciously, and rusting machinery a little.
Did you find this review helpful?yesno
»