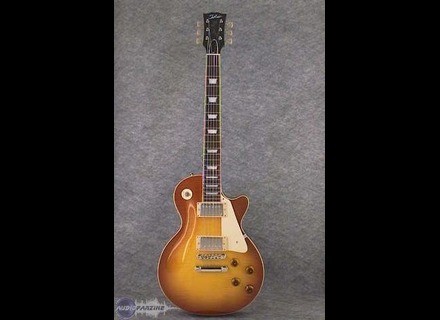 Axlslash's review (This content has been automatically translated from French)" A very good compromise."

The handle is surprising, I was afraid to end up with a log (from the world of strats ...).

I rediscovered my bends and vibrated, it's crazy. It is really good, it is very fluid, the key is very beautiful inlays too. Access to acute correct LP what many do not like ... We made it.

One branch, it sounds ... That will rather say the amp.

Sounds very rock, was the spirit of the guitar crying in the treble, it's great. She is very good in blues, it's either clean or overdrive.

Played on a tweed, a pod HD and class 5 is that of happiness.

It's been two months since I use it, I love it. She is doing well everywhere. Do not look obviously Fender sounds ...

What interests everyone, this is what it is compared to Gibson.

I situate between a studio and a std towards a traditionnal. The finish is done well, a little too bright can be, but the quality is there, it is clear. With a few small changes (truss rod cover, hiding microphones buttons (no knobs!)), We arrive at a beautiful guitar and sounds really good.
Tokai brand interests me even more is a really good guitar. If you have a budget a little tight, and you're ready to not having Gibson on the head, do not hesitate. Obviously, this is different, it can not be identical, but it is very close, and it sounds terribly well.

For the price, this is fabulous.

Sorry for my short answer en français, I wrote a verbose purpose of comparison with my 1984 Tokai LS60 Two similar models in the Tokai forum:

And Another 1981 about my Tokai LS120 testing SEVERAL bridge humbuckers:

ouaza's review (This content has been automatically translated from French)

Tokai Love Rock
5
Copy of Gibson Les Paul frabriquée in Japan. There are different models but basically There's two levels: those manufactured in Japan (the premium) and those manufactured in Korea (I think it's Korea, the low-end). The one I'm talking about is the high end!
FYI I have had several opportunities to play on standart lespaul and when I bought it I tried it for 3 hours non-stop, alternating with a standart lespaul to see the differences!

Simply put this guitar includes all the features of a real Les Paul: 22 round boxes glued, rather large, round button rosewood and mahogany, varnish -> handle lespaul what!
The body is 2 pieces of mahogany and curly maple tables massive! Beautiful !!!!! It's crazy!
The bridge is tune o matic, as the true.
3 position selector, 2 volumes, 2 tones, you know the song!

The only difference are the pickups! This is not a gibson malheusement but hey you can not have everything and then it will change!

Again it is impressive all there! Compared to the lespaul differences are really small!!
Though I alternate between the two when I tried it hard to see the difference when the guitars are connected! All there really is crazy

Of course in using it involves all the disadvantages of a Les Paul: weight access to acute ...

In terms of sound through an amp, we can see the difference with the Les Paul but I think it's only due to micro!!
The bass sounds almost like a bang, it's amazing, it's hot desire, a little fat just right, it has a typical grain gibson. Play with the volume becomes a real treat!! On its CRUCH it down to its clear and good sound is saturated marshall crunch down on a beautiful clear to limit the attack on the mediator !!!!!!
Whether it is for blues or rock is happiness!

In terms of it's less acute: it is the one we see a difference lespaul! The sound is a little more aggressive with a gibson and it's a shame. It may be appropriate for very big fan of his but I am not satisfied! Finally again we can change and it's still far from the standart price of a Les Paul!
Basically if there were any gibson pickups on it (well mostly for the treble) I put 10/10

I urge that wants to buy a Les Paul: ca 17,000 francs is expensive especially since it takes a lot more for a beautiful finish!

By the way to meet daniel70: me personally, I have absolutely no problem fret! It will soon be 2 years that I have and really it does not move!

I would definitely do it again this election !!!!!!

Dashounai's review (This content has been automatically translated from French)

The handle is terrible! The action is very close to the frets! No curled found. Access to acute extreme but not good I never use it: D
The shape is really respected in relation to the Gibson Epiphone unlike (which are really not the weight ...) and the guitar is not so heavy as that. When sitting, it is not the top compared to my SG!
Gets easily your sound good?

The sound is clear that both disto! I can judge this thanks to the receiver of the store, much better than mine or his way out (Marshall MG15DFX do not buy ever) but the bottom of a 75 watt transistor RANDALL jettait ca! But it must be admitted: the sound is very good, but not as good as a Gibson. But it is easy to fix: paste him two seymour Duncan 59 '! And get the Gibson's small: D And is not messing the sound is still a very nasty cause.

The Gibson Les Paul Standard is the same with better microphones, and SG have the same character so I can not compare.

I consider the unbeatable value for money ... In addition ca can invest in new pickups!

If I would do the same choice? What a question!

Did you find this review helpful?yesno
»
Read the 5 user reviews on the Tokai Love Rock »