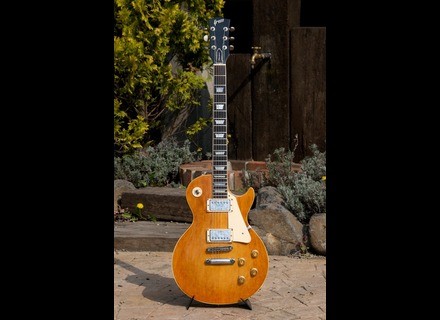 Greco EG1200
4
a little history.
Brand GRECO is a Japanese brand that as many of these congeners (tokai, ibanez, Fernandes) put this in the 70 to manufacture clones of Fender and Gibson. First, approximately, and then getting better and sometimes even exceed the models as some vintage Tokai LS120 or Greco 1200 Super Real from 80/81.
frankly, before 74, the copies of Lp were not worth much (approximate shape, handle screw, micro means, etc. ...) from 74, the shapes become more realistic, some series adopts the high-end sleeve glued, microphones improves, brief is better but not there yet ...
From 77, the production made a real leap forward in greco, surveying almost identical relevant micro (U-series and later the Dry Z or other screamin&#39;82) and especially very neat finish even on average ranges.
I owned a GC with 500 standard finish and class that emanated from it in the widely dated back gibs The Paul or studio of the same period.
The holy grail remains well on super real series 1000 or 1200, reproduced almost identically les paul 58/59, non-automated manufacturing (the first machine to reach 82 with the series collection mint) finish to fall, the grail you said .. .
In 77 3 years before, a small number appears on the catalog project called 76/77 series with various models including three LP, a custom (EG1500, and two standard EG 1350 and EG 1200), she did not even stay one year whole. Indeed, the project disappears series of catalogs 77 of year-end.
These guitars were made by hand and not reproducing historical patterns of Gibson, but the models on sale at the time.
Which found that the manufacture and pancake the size of the paul standard 77.
Another feature of this series, finishing Violin Amber and application of a varnish especially designed in the 50&#39;s in Japan.
It is therefore, a Les Paul all there is more classic with two humbuckers U4000, two volumes, two tones, but full body design pancake (slice of mahogany glued together) and maple table. handle three parts rounded profile 59 I would say that binding has turned quite yellow cream around the neck and body, medium frets, Grover, bridge tune o matic type.
the weight of mine is around 4.5kg.
She has 33 years, therefore, some scratches, some shots too, but the neck is straight, the painted soft to the touch.

The guitar is not a model of lightness. 4.5 kg it weighs a little but I think I like (still feeling ridiculous to have the money ...).
I like the ergonomics of the les paul, access to acute is average, but I dont care, I will only very rarely in the 17 box, so ...
Controls volume / tones are very reactive, absolutely not here to decorate the Greco pickups are very expressive and cover a wide range of severe to very severe.
about the resulting sounds ... see below

For sound, it sounds Les Paul Gibson ... but not exactly. U 4000 mics are not PAF gibs therefore, necessarily is another grain. compared to a classic 57, I find U 4000 more nervous, less plump, even if the are obtained are well in mind Paul, fat and fleshy, but less "rough" especially with a level of distortion a bit high . sounds seem more defined. Nervous is the word that I find most suitable to describe these pickups.
to draw a parallel with a microphone Gibs, I would say that this approximates a mix between a P90 and a 490 ... but hey, it&#39;s really just to give an idea ..

The sounds are in the soul-paulien, obviously saw the age of the lady, very vintage oriented, ideal for sound velvety, warm, not really aggressive but with a huge dynamic range and great presence. this is for clear sound.
overdrive in the beautiful becomes downright surly, big juicy crunch, even biting but always keeping a good definition.
Moreover, even with a very distal support (high gain mode on plexitone) it keeps the vintage side and always a good definition of notes.


I have since yesterday, so obviously that&#39;s all cool, but I played with for three / four hours.
and this is not my first Greco, nor the first Les Paul that I play.
So, just enough to already have an idea of ​​what it has in the trunk, and the beautiful promises a lot ..
This is not my first Greco as I said, but it is by far the best in terms of violin and microphone, projection series is little known, but if it does not equal the Super real, it far exceeds most of the LP Series Mint Collection (in any case, all those equipped Screamin&#39;82) much more famous.
If you find the sound of Gibson, unless a change of microphones, spend your way is not exactly the same grain, but if you find a good real Les Paul has made the former, then the die Japanese vintage of premium may be a good option for those who have not 3000 or 5000 € has put into buying a guitar.