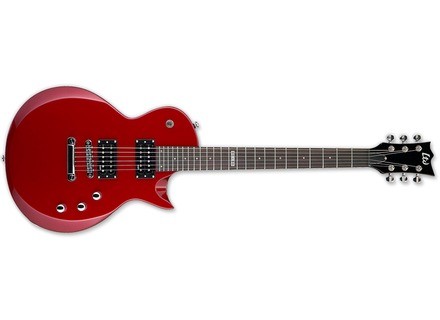 EC-50, LP-Shaped Guitar from LTD in the Standard EC series.

LTD EC-50
2
The EC50 is part of the LTD line that ESP offers. These are geared towards those who are looking for an entry level guitar and cannot afford the MIJ ESP models, or even the higher model LTDs. The guitar featres a bolt-on neck, 24.75'' scale, basswood body, maple neck, rosewood fretboard, 24 extra jumbo frets, two humbuckers, TOM style hardtail bridge, dot inlays and has a center inlay at the 12th fret.

The fit and finish on this is pretty bad. For one, there's a big gap in the neck pocket. To me, this is pretty unacceptable, even if it is meant to be a budget model. The body itself isn't bad since it's made with a CNC machine, but the finish is pretty bad. You can see runs in it, and it's not nearly up to the standards of the higher LTD series. The fretwork on this is pretty bad, too. They don't seem to make an effort to truly bevel the ends and crown the frets so they're perfectly even. I found certain frets that were lower than others, and this makes it fret out when bending with lower action.

The pickups in this thing are pretty awful. They sound dull and lifeless regardless as to what you EQ the amp with. However, given how cheap the guitar is, that's somewhat to be expected. The guitar itself doesn't resonate that much, and it's made out of basswood. While I do like basswood, I don't feel a guitar made in the EC style body shape should be made out of basswood. It may be a looks thing, but it simply doesn't seem to fit the image of what the guitar should sound like. The bolt-on neck doesn't do it any favors, either. Even with a pickup swap, you're still pissing in the wind when it comes to trying to make these sound great.

If you're looking at one of these, I recommend avoiding them. They're not great guitars, and the flaws outweigh the price point. I recommend trying to either buy a higher number LTD such as the EC1000 or simply buy used. That should get you the best deal out of all, and it'll save you the hassle of trying to make a dead piece of wood sound good.
Did you find this review helpful?yesno
»

lionel3999's review (This content has been automatically translated from French)

- Channel pleasant, fine, fast
- Acceter suitable for sharp, some desagrment because of the form
- Good grip, nice shape, a little heavy but not too much weight
- Typ metal sound they had to do with wholes

Fits very well if I play a ((Death Metal)
I play a marshal MG100 and a pedal boss mt2 and sound and overgrazing is nothing to say on the point. Micro Treble's great I use it, the neck pickup and not top parcontre: / this is the only defect I trouver.On has a sound very fat

I have since 1year I am very contend this is my first guitar! I love her look
THE report caliter price not bad! I will refraer choice without siter
Did you find this review helpful?yesno
»

razen's review (This content has been automatically translated from French)

- The handle is ultra-comfortable and super fast, no complaints!
- Access to acute is not easy but it is the shape of the guitar that wants his, after you get used to it you play worse and this opinion is that you like the logical form, not ?.
- It's true that this scraper weighs his weight but is not lead either! let's say that weight is sitting correct.Sinon to play the guitar a tendency to slip so it must be the stall but I do not either pence a major problem ...
-There are good sound quickly.

- Level distortion sounds in it and not give a little!
it has a palm-mute and crazy harmonics emerge rather well.
In the light we see that this guitar has tendency to take refuge in the grave so it must be dosed with the amp, for example with a fender type amp rebalances its a little balance, so for his clean, (almost) everything depends on the amp.
Otherwise if it is to play distortion is no problem ..
- Except it's true that the mics a bit but the sin is to make way for less than 300 € we will not have a new electric with EMG-81 for example! it would mean that the guitar without the microphones would be about € 100 .. So it will change the pickups so I do not take into account in my rating than most series are not so terrible ..

- I use it for about a year.
- The characteristic I like most is its shape (yes I'm like that myself and not otherwise) after there are two thing that annoy me: the black is super messy acastillage lol we see all traces of fingers need to clean all the time .. and more serious about my guitar input jack is unscrewed all the time so I have to regularly tighten.
- Seriously value for money is more qu'exellent, it was just under € 250 now for that price you can not fault it.
-With experience and with the same budget I would do so this choice.
Did you find this review helpful?yesno
»

Reidh-WFBF's review (This content has been automatically translated from French)

The handle and gnial the doights very easy to walk right it's true that Access in acute and a fair bit to the 22nd cargo, but otherwise it has a great look (although that one little heavy but the form is to be expected paul)

For sound is saturated the hair, the palm-mute are really big and fat if you have the amp with, who am against sound clean and cold (but it must come from my amp) so I think this with a small scratch his spiderII trs should pass for the type mtal as rock or pop

I use it for about a year and it's a good scratch trs for this award la.J 'loves her palm-mute but may need to be a micro switch for the treble a bit more thought incisif.je I would do this choice

Did you find this review helpful?yesno
»
Read the 13 user reviews on the LTD EC-50 »