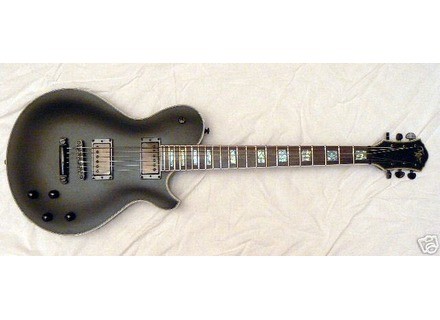 slamspider's review (This content has been automatically translated from French)

22 Frets
Micro Michael Kelly PAF-Plus (Gibson style) Tinted Black Metallic
Micros very rock, its super powerful fat and the Paulesque
I have a spare part microphones Gibson, Dimarzio, Seymour Duncan (the classic qualities) and in comparison: The pickups are great (it makes me think of the GFS pickups are excellent in quality / price ratio but better).
Impressive for its price!

With a split coil humbucker on both allowing a variety of sounds incredible.

Perfectly straight stick, insert pearl with beautiful turquoise reflections,
Grover (it&#39;s great because it is rare on guitar for this price)

THERE&#39;S EXPERTISE IN THE FOLLOWING CAR GIBSON "MICHAEL KELLY" A FORMER LUTHIER WHO WORKED FOR GIBSON.

The handle is very nice, straight, beautiful mother of pearl inlay with beautiful turquoise reflections.
Channel slim type 60 (for experts), not too big, not too thin.

In weight, it is fairly well balanced.
It is equivalent to a modern Les Paul parcontre the body is thinner.
Good ergonomics.
Micros very rock, its super powerful fat and the Paulesque
Impressive for its price!
The sound quality is titannesque:
Rock, Jazz, Blues, Metal, Raggae, Funk, you can play almost anything: it is super versatile and everything is clean
A BIG SOUND

For my part I play Rock, Raggae, Funky and guitar suits me much better than my Gibson SG.

I play with a Marshall JCM900, and a Line6 Pod2 of whether the headphone on the Pod and directly on the tube amp I AM subjugated.

The sound is of the Les Paul but with their technique to split the buttons that are drawn towards you, you can have for another type of well Jazz and the palette is more Grandris.
You can have such a highly saturated fat its very high quality as its edge but both round and very sweet.

Here is the presentation of Michael Kelly:
It&#39;s dark! It&#39;s clean! It&#39;s the Shadow!
This model is a perfect instrument for exploring the dark side.
The full satin black finish contrasts with the standard traditional high gloss ("gloss" standard) electric guitars.
The matte finish perfectly clear under the stage lights and black hardware reinforces her pretty look ..
The tone of this guitar is powerful and warm.
It is equipped with our hottest pickups, and the use of dual microphones "single coil" is possible ..

I have since yesterday and I have received a slap in testing this guitar.
I had a copy made in Japan Les Paul with Seymour Duncan JB, which was not bad (nice violin type "standard") but the sound was not worth the Shadow.
A copy of Gibson explore heavy and not great.
A warlock with a BC Rick Dimarzio X2N, a good sound for all that is Rock and metal mostly but a shape and a handle that does not suit me at all.
The Patriot Shadow is much better than the guitars.

I am also a comparison with two other different GIBSON: an SG Standard, a "The Paul".
It sounds better than my SG Special and The Paul and is almost equivalent to the SG standard (which has a rosewood still better).
I&#39;m not talking sound which sounds different from each other, of course, but in terms of sound quality that emerges.
My Gibson SG Special is not bad but frankly Mickael Kelly Patriot Shadow is more versatile and I think has a better sound.

IN ADDITION, ALL ARE GREAT MICHAEL KELLY
The Patriots, The Valor and more ...
They all have a beautiful violin.

IF YOU FIND ONE OF OCCAZ: jump on it is rare for the time being.

A CHOICE TO DO AND AGAIN, ESPECIALLY FOR SMALL BUDGETS.

Make no mistake, THE SOUND IS HIGH QUALITY!

I remember: The Michael Kelly Patriot Shadow was voted "Pick of the Year" by "Guitarist" in the U.S., it&#39;s not for nothing.
And Michael Kelly is a former maker Gibson.
@ +

PS:
I join the opinion of expert euroguiare. Com:

The Michael Kelly Patriot Shadow is a beautiful guitar in matte finish equipped with microphones most "hot" desired by Michael Kelly.
The result is a heavy and fat that has attracted many American metal bands. The look is impressive with all the fittings in black to match the mahogany body.
This guitar is made ​​for dark souls!
Note the great split that can go from the humbucker to single coil (single coil) in a second ...