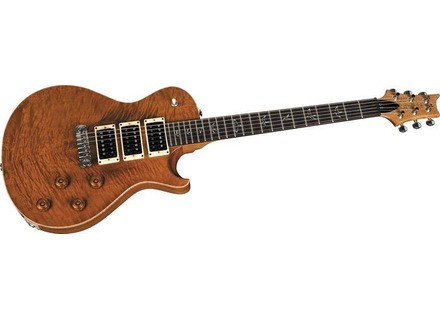 PRS Chris Henderson
5
These Paul Reed Smith and guitars have a great sound and the extremely versatile tone and mixes well and pretty much any style of music. One of the selling points of these guitars is your ability to go from a very chimy clean tone all the way up into a modern new metal type tone. I have seen country players all the way up to new or modern metal type guitars use these guitars very easily and efficiently. Not to mention their versatility but they also look very good as well. Most these guitars are built well and have a beautiful maple top or a flame maple top mixed with the mahogany wood for the body in the neck. They generally have a double some bucker pick up arrangement with volume control knob and tone control knob. They generally don't feature anything more than you would see on a Gibson guitar or any type of Fender guitar but they just had a great brilliance and tone that works and most musical situations. This one is built for the guy from Three Doors Down, and it beats me why anyone marks him as an influence enough to buy his sig guitar.

Whether you're playing a clean tone with the Fender amplifier or a modern high gain tone with a Mesa boogie amplifier you get a great soun dout of these guitars. With the mahogany wood in the body in the neck coupled with the maple top you get a great mix of frequencies with those total woods that gives you extreme versatility within your fingertips. The shape of these guitars are great stand out as well. You are able to reach the higher frets a lot easier than you would a Fender or Gibson guitar because the cutaway of the neck is more comfortable for those trying to reach those higher frets. Many of the Paul Reed Smith guitars looks similar to Gibson guitars such as the Gibson Les Paul or the Gibson SG but they really have their own body shape going. They give a very pertussis and sick tone when using a high gain amplifier that really sounds great as a rhythm or a lead type sound.

These guitars you can find pretty easily as well as many other great sounding Paul Reed Smith guitars. Many of them have pretty much a very similar sound to them. I've played a number of Paul Reed Smith guitars and most of them really sound pretty much the same to one another. They do have different feel to them and the neck can be a little bit different in shape but overall the sound is pretty much the same. Of course the cutaways that look like a Les Paul will sound different then the 24 or the 22 model PRS guitars. Overall he had a great sound and extremely versatile and a lot of fun to play.