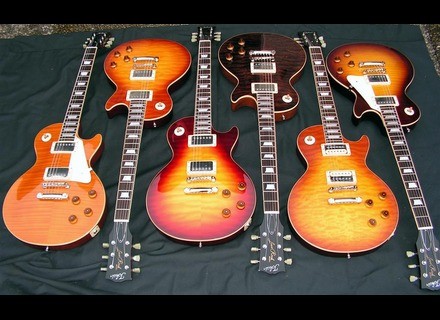 kikill's review (This content has been automatically translated from French)

I'll add pictures ending for .. or go to my Profile

-The handle is enjoyable .. RAS if you like the gibson polish sleeve type
-Access to acute bah ... not easy to beginners but it is
-The ergonomics? it is not a strat sr ... but it is not achte a!
It is the norm .. tyiquement gibson .. and especially a rgal: NOTHING TO DO WITH EPIPHONE!

7 jmeter will objectively becaufe a Les Paul has a comfort issue dsaventage ...

I mainly play the Hardrock, but also a little Punk / Emo, and blues ..
to be everywhere, the Outbox of the big and fat should be the o!
-The sound is warm (thank you mahogany) and sustain Submitted ...
(I did not test but my Gibs singer who has played on gibson says it kifkif)
It sends the bridge pickup and sauce is trs diffrent the neck pickup, more aggressive while the neck pickup is round.

In clear-the sound is not crystal, but round and warm .. say anything, the les paul has absolutely no shame of his clear sound!
It is a neck pickup is warm and ... rgal chubby wish .. with a lil crunch we are in paradise!

Assets:
Super-clear sound in spite of what I expected (humbuckers)
-Crunch and distortion ... nickeeeeeel! Les Paul sound!
-Price .. (it fattens not amricains and it does not pay the logo while having gibson gibson sound)

Cons:
, The weight can be ... although personally I feel my prfre scratch!
-The ergonomics .. but as I said above is not a les paul achte for a.

I do it again a thousand times that choice!
the finish is superb and the sound also ... everything has a price reasonable trs!
I put 10 because I am totally satisfied .. it has everything you ask of a Les Paul!

[edit]
I drop a point because of the electron leaving DSIR.
notement that damn selector ..
good is 5 prfre a selector but I know!

[reed]
dj for over a year I have my jewelry
APRS in a small rglage an excellent luthier alias Damico I fall more in love with my bte ..
I used to seek the advice of Damico on my guitar, "you take the same finishes at Gibson dj're over 3000" So much for the skeptics!

I rgl the problem of lack of precision in the micro replaceable by EMG85/89.
alnico always sound so hot but still won in PCHE and tidy ...
So nothing wrong .. fans of Les Paul you will be delighted!
it is warm and clear, sends a steak when it is needed and it is sweet and singing when you want.
I love my love rock

lolodoc's review (This content has been automatically translated from French)

Tokai Love Rock LS90Q
5
I'll donnermon modesteavis on the instrument that I know and use every day ... (not a vrite on all guitars SERIES ...)

Body: Saddle table in 2 parts, mahogany back
: Sleeveless al mahogany while some (short scale stud), touches rosewood (rosewood)
Pickups: 2 vintage microphones Paf MK2
lctronique: Japanese (Systm nitric pots, wires ,...): is better than Chinese or Koren, but we can upgrade to the CTS United States ... For example ...
Fitting: Japanese .... it looks like a lot of "Gotoh" all cella ..... but I've not said anything much sr!

enjoyable round trs, trs good varnish, perfect rgonomie (lighter than a gibson les paul ... thank you for my back!), it does "not address a cot jou standing and "Calle is good" when it is played sitting ...

Sound good?? and although there are only cella of this guitar !!!!!!!!

with Paf pickups and a Gibson brand lctronique United States "clean ".... trs violin making as well .... once the instrument well rgl harmonic m just ... ttez prjugs of your cot, close your eyes, open your ears: you play a gibson! it's also disturbing that ca!

I have 20 years of jou gibson (les paul, sg, nighthawk ..)... all trs ca is good in gnral but then I got tired of varnish "poissent "in the hands, and the quality of production Ingala .....
I'm looking for a gibson without his painted "mrdique my taste," with more lgret (lighter instrument), just as well made from quality wood and finished equivalent .. ..

But as I n'aipas enough money, I just pay a tokai secondhand mij range of reasonably priced, I GRRF 2 pickups and Gibson 490 R T secondhand found for 80 euros on e-bay, I've redone my even while the electronic "CTS" and condo "orange drop "...... and I can guarantee you that this Small scratches simply does not envy a Gibson Les Paul made in 2008 or 2009 .......... ca me simply allowed to sell my 2 Gibsons when I realized that Early tokai "rang better"!