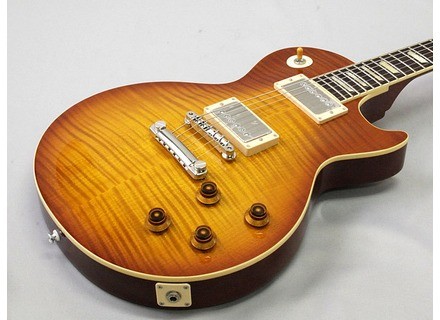 Pucelle_Dabidjan's review (This content has been automatically translated from French)"Guitar World Champion for money. The missing link between trad and RI Gibs!"

Tokai LS 195 S
4
Before beginning this test. I would again emphasize the fact that I belong - Ni Protokaieux clan, who think that their smoke the Tokai Gibson breakfast - Ni Antigibsonniens clan, family expanding, probably by some bitter torments that to cross the mark in the dying decade. Rather it is a pleasure to offer you the test instrument so successful.

Analysis: Once the box open, we are surprised to discover a beautiful instrument. The finish is almost military, he exudes a sense of stability. Those familiar with Gibson know that if the brand makes beautiful guitars (in fact often more beautiful than the Tokay) is not necessarily the stability that is obvious on the beautiful American.

The shaping of the handle surprises by its high quality (see below), the quality of the wood affects both. And for once, the table is carved from a maple graining which is far from being ugly and the sunburst is pretty successful <strong>(which is far from always the case</strong> that we <strong>tokai</strong> accustomed in recent years "and Vômiburst Clownburst "of all edges). For a price of 1400 euros, delivered and released, the price / performance ratio is almost unimaginable. 1400 euros guys! For a guitar of this caliber, nobody around me can not believe. [9] One can hardly do better. If I want chipotte, I would say the box is not the marmoset at Gibson and it dépoile already. In return, the tokai box is more compact, lighter and just as hard.

You will find some pictures in Media section of this product

And yes, as glimpsed earlier, more compact box may contain fewer things. In fact, there will not be enough room for a big strap + jack + a tuner. By-cons, if you roam a lot, you will appreciate the size and weight of the craft over content.

<strong>The handle is undeniably part of this guitar worship.</strong> I&#39;m just upset by the quality of touch. Here, Tokai wanted to move away from what is usually found on the ls series of midrange. You can find a handle cut into the size 60&#39;s Gibson slim type (no I&#39;m not kidding), the resemblance is striking. The luthier who had fashioned fairy fingers. The denominator is the most suitable <strong>"sensual"!</strong> Successful integration of all the frets, setting the hair but very low original (not please everyone). The frets are those found on old custom (you know, the lp nicknamed "fretless wonder ")... So models "small" ... it kills and routed at the same time! The hardness of play on this instrument is good, without reaching the Tokai 59RI ls360 or gibson that are real references on the subject. Meanwhile, it can really go on the ropes, which is not worse.

The guitar is very heavy. Count 4.8 pounds for mine (with no relief, I said holes and others). This has an important influence on the sound as we shall see below.

The varnish is very good, I have no evil for slippage, even with sweating all goes well. I regret the absence of a color-type "stain" and the nitro lacquer that was still up to 2007. Admittedly, Gibson does not, but it&#39;s really the best method on this kind of instrument.

<strong>The tuning is very good, efficient and stable. At this price level and so also impressive, it&#39;s very very rare.</strong> The race of knobs is also very good. The range of action of its past is very high because they behave very linear offer corrective measures throughout their rotational spectrum. Note that they all possess a small witness perfectly viewable from the control station, which can always find its settings quickly.

[8] Yes it is an lp, and the ergonomics of that particular (you know, I&#39;m not a drawing) can ensure a higher score. But this is my grade for a lp.

When empty, always a surprise. The guitar shows introvert with a warmth, turned instead to a medium low and medium thick with a lot of grain. The highs are nicely softened, bass, although very present, do not unnecessarily pours down. With a larger wrist pulse, we find a tendency of the instrument to twang, no collapse or crimson sound.

<strong>The handle is particularly vivid for a lp,</strong> especially in sections 1-5, you can feel the guitar live at each pulse but without exaggeration, as is sometimes the case.

Plugged the guitar then flew to a very high level. It took me a few days before the woods do, but then I lived through truly exceptional. The qualities of the instrument vacuum are still there, but we also hear very clearly the grain typical of this type of instrument, richly grainy. We often talk about "mushy" when speaking of his lp. Tokai on this, it does not bleed, it stirs. I also note a very homogeneous behavior. The notes are part of something here that tumbles like a carpet. It&#39;s hard to hear a little more each note exactly, yet all the sound is still there. It&#39;s just that it does not sound like laser cut on the warrior, Vigier, PRS, Music Man and other dean cs.

I had the honor to try / own several Les Paul, as well as tokai gibson. Like all the lp, this guitar has its own character as another instrument, yet the same series, will not necessarily. What is unique about the mine, this is a trend more nervous. The sound ignites when the wrist is boost a little stronger for those who want a sound example, you can go to quell the videos of Doug Aldrich. The behavior is very clear in this.

Now talking about what may upset in more than one, <span style="text-decoration: underline;">the microphones!</span> Yes, they are clearly good, but lack the personality of a good old bang or a seymour. They are gentler on the easel, and more gaineux right for the bridge, but we try to end the sound that Gibson is a little lacking here. I installed a <strong>59 PAF r éédition original</strong> Amber pickups in neck and bridge position <span style="text-decoration: underline;">(the</span> sensation in the guitar world in 2009). With the rise of micro, forget <strong>there&#39;s no words, the fan will cry lp.</strong> I assure you.

It can attack a wide range of styles with this instrument. Sensitivity to touch and versatile side opens many doors. But no kidding, where Miss smoke anything that comes along, it&#39;s rock! This guitar excels in the registry vintage to modern rock.
<strong>[10] absolution from his lp. You can still find better, certainly, but then is: guitar luthier large (Nik Huber Feline Ruokangas), Navigators, Jet, Tokai 3xx series or some old gibson lp special manufactured in the good all days of the mark . I insist on the plan sound quality, this guitar is between the standard lp tratiional and RI.</strong>

I own this instrument since a few months. It is certain that my opinion will change over time. Despite the fact that I am user of three beautiful guitars, Tokai that brought me what I wanted to recover from sales (forced) from my old LP. I can, again, support my opinion on many possessions and testing of LP guitars. I, indeed, long sought an instrument of this type that gives me satisfaction (8 years).

Yes with good pickups, this guitar is more expensive! Yes, Switzerland and Japan are in the same economic space so that virtually pays no VAT on this instrument! Yes it was balanced!

Find me a new instrument in store, which for 1400 euro brings as much happiness? You need to get up early and stay up late for years.

[8] Yes, because despite everything. LP aficionados will see in this tokai a step towards ultimate LP. However, this guitar offers a real interest. First for the Turners, who have an LP that exudes stability and providing a feast for less covetousness. Then the professionals who are broke can finally afford that kills the sound for their album.