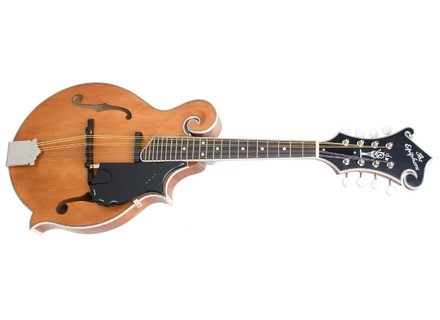 MM-50E Professional, Mandolin from Epiphone in the MM series.

Epiphone MM-50E Professional
4
When my boss's old epiphone mandolin finally became so fragile that it could no longer be used on tour, we acquired a new Epiphone MM-50E to fill the void left by an instrument that had served him well for many years.

The MM-50E is naturally finished out of Sitka Spruce, with a maple neck, and simple appointments such as cream binding on the neck, headstock and body, and a beautiful ornamental inlay in the headstock. It boasts 23 frets set into 14 inch scale rosewood with simple dot inlays, and a 1.06 wide genuine bone nut.

amplification is provided courtesy of a NanoMAG pickguard-style pickup and preamp system, with individual volume, bass, and treble controls. Individual string output levels are controlled via miniature trim pots on the pickguard.

Right out of the box, the MM-50E plays decently well. This one required a setup, but most of them do. String spacing is comfortable, unlike cheaper mandolins, which can have their strings too closely spaced. The Nut was adequately cut and polished, allowing the mandolin to be properly intonated throughout the length of the scale, and allowing string vibration to resonante sufficiently throughout the instrument.


It's also worthy to note that one should buy a specialized jack-tightening tool, as accessing the inside of the Mandolin is virtually impossible. The jack tends to come loose from time to time, and tightening it with a standard wrench can cause the jack to turn, to the point of breaking the wiring inside, and then you're truly screwed. Stewmac sells several models of these jack tighteners that prevent this from happening.

The MM-50E plays decently well unplugged, but most people purchase it for its amplified capabilities, which is where the NanoMAG pickup comes under scrutiny.

The individual controls for Bass, Treble, and Volume are quite nice on the NanoMAG. However, we typically leave them wide open and control EQ and volume through an LR Baggs Para-Acoustic DI unit, which works beautifully.

Physically, the pickup portion of the NanoMAG is poorly designed, using a threaded wheel to support one end of the pickup, and raise or lower its height. I found that very little adjustment was capable without the wheel coming off completely, and having to be carefully re-attached.

Another issue with the NanoMAG pickup is noise. It generates buzz and hum in the upper frequencies that is nearly impossible to completely eliminate, so our FOH engineer tries to gate it off as best he can. I would elect to bypass the EQ/Preamp circuit of the NanoMAG if I could, as I suspect this has a lot to do with it the noise.

When properly set up, the MM-50E produces a nice, full, rich sound through the sound system, with good note separation and warmth.

The Epiphone MM-50E is a reasonably professional instrument, and has served us well on tour for over a year now. It hasn't been without its issues (such as the noted pickup problems), but we've been able to deal with them. It's unfair to compare the instrument to vintage or high-end mandolins, but for a modern, production model mando, it is a very good instrument, nicer than most Fender or Ovations I've played.

Perhaps in the future Epiphone can improve on their pickup system.