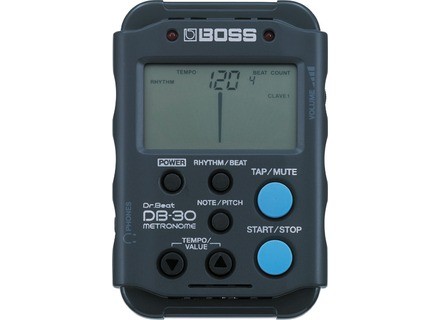 DB-30 Dr. Beat, Metronome from Boss in the DB series.

Boss DB-30 Dr. Beat
5
I've used this metronome in all of my years as a student as well as as a teacher. I've been playing piano seriously since I was just a little boy and bass since middle school. I'm currently not in a band...just teaching at the moment. It's palm-sized and black. More to follow in the review...

I got it because I needed a portable metronome. It was only about $30 at the time I purchased it from Volkwein's (one of the last purchases I ever made there...) back in 2002 or so. It was cheap, and the Boss Dr. Beat series has gotten plenty of well-deserved good press, so it was an easy decision.

Incredibly long battery life, for one thing. I've only had to change the battery four or five times in those 8 years that I've owned it, and considering the fact that I use it daily, that's not bad at all. It'll do anything from 2/4 to 7/4 with a couple clave rhythms inbetween, and it'll play various subdivisions within that structure. It also has a little clip on the back so it can sit on your belt or on a music stand. Definitely helpful. It can also be used to give drone notes for tuning instruments or having something to tune to in exercises for string instruments. Having a headphone jack helps as well, especially for use in live performances when a song's tempo is critical.

I would like to see more polyrhythms and styles represented, and I'd like more control over what subdivisions are played, but that's something that is already represented in a higher model. So I guess I'm not really complaining with this one. I'm just ready to move on.

The Dr. Beat metronomes are the best drummers you'll ever play with. And you can carry them in your pocket.

djalbatteur's review (This content has been automatically translated from French)

Boss DB-30 Dr. Beat
I wonder if I just use it on stage in the dark (if it is retro eclere)
thank you
Did you find this review helpful?yesno
»

# What is so special that you love the most, least?
- The Pros:
intuitive,
several types of sound, multiple time signatures available,
headphone jack (which can also serve as a Line Out)
volume control,
two LEDs for visual indicator: super handy for notes.

- The Cons:
no automatic stop: the coup if you forget to turn it off, the batteries will morfler, no asymmetric signatures (3/5, 7/8, 11/8 etc.),
the speaker on the back of the coup must avoid lay it flat, the sound suffers.

Did you tried many other models before buying it?
No, no ...

How would you rate the quality / price?
Very good. It's solid (mine was quite a fall from his perch (my desk) and it is ideally configurable: neither too much nor too little.

With experience, you do again this choice?
Yes.
Did you find this review helpful?yesno
»

raph.bass's review (This content has been automatically translated from French)

Boss DB-30 Dr. Beat
5
I use it for several months. We manage everything on this little metronome. All rhythmic figures are available (or asymmetric measures including slaves counted in the black at the eighth, the wrong time ...). There is no way to enter the desired tempo with the tap button. The volume is adjustable, you just plug in headphones or monitor with LED. There is also a mode that gives all the notes to match.
Perfect companion for work alone.
Did you find this review helpful?yesno
»
Read the 9 user reviews on the Boss DB-30 Dr. Beat »

Other categories in Accessories for Musical Instruments