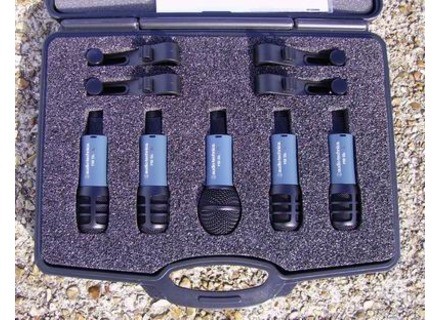 All user reviews for the Audio-Technica MB/DK 5

Average Score:4.5( 4.5/5 based on 2 reviews )
Value For Money : Excellent
Not satisfied with those reviews?
Our members also liked:

Audio-Technica MB/DK 5
4
Dynamic drum microphone kit. Micros metal. Toms consisting of four microphones and a microphone bass drum with their forceps in a storage case made of hard plastic.

[7] Rather good, but heavy and very large, which will not suit everyone. Another problem is the price, which is not related to the well better for all. So we always hear of poor people who have never tried to speak ill

The set up fairly quickly, the clamps are a little too strong and harsh, but they have the advantage that, once placed, they do not move an inch.

As stated above, the pickups are very large, it is far from competing microtechnology and some bad drummers Trops nags, which are poorly and have small barrels (all this must absolutely be met) could be embarrassed.

Otherwise it's a hit Yvonne. The sound of this set is very oriented "responsiveness". The sounds are a little less round, but collide over and attack hard and fast with a shade well respected. That this point very well with the kick drum microphone that sends its very dense and hot, but with little open back. It almost felt like a trigger, but with more balls and heat. Toms mics well restore the original sound (still with plenty of attack) and équalisent in some-way, the following extended vibration type. The resulting sound is more dynamic.

Our sound engineer, which itself has a battery kit sennheiser (E602 + E604), grew big eyes when they heard the cattle. His verdict was a pleasure, "although the characters are different, these kits are worth it in terms of sound."

In short, you need a battery pack to affordable models, see, a CD with a drum sound reactive. This set could be for you.

Recently, in which the styles we use. The rock in all its existing derivatives and also a little old school without going into rockabilly. Our style itself is a kind of punk / metal oldschool / funk / oldschool thrash / grunge revolutionary arrrache without being unnecessarily nag and still leaves room for the melody. With this kit, the battery can proudly take its place in the mix. We connect this set on an auto soundcraft spirit 24 track, the sound is excellent.

[8] No yucky, cheap, but somewhat cumbersome. Not suit non-plus for all uses and styles. A buy knowingly.

dannyz_280's review (This content has been automatically translated from French)

I give an avi overall product and I talked about the reissued for qualitée Audible because I have not mixed with.

impeccable finish, solid strap clip, he can roll with the punches without flinching sticks!
a little big and annoying if placed on all small toms
to the next for more info