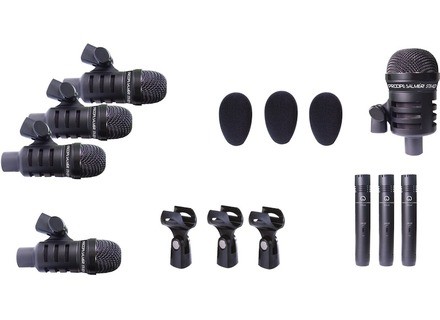 Claude Salmieri drum mic pack was designed to restore your playing with as much accuracy as possible.

The pack consists of 8 microphones:

The ST-8 set is supplied in a durable carrying case and includes 3 SHIELDS and 3 HOLDER MOUNTS to use with the overheads.

The ST-8 set is supplied in a durable carrying case and includes 3 SHIELDS and 3 HOLDER MOUNTS to use with the overheads.

Overall, the review of this kit is plutt convincing and respects the natural sound of drums.
Toms are Submitted, trs overheads are well made.
I use the mic on the snare drum timbre, complment in a 57 or a akg on striking is plutt good.

I find the micro bassdrum equilibrated it will not work in the hsiter mix.
That did not end up with a dj bassdrum that is not out of the mix?
This is mainly to the fact that there are too low and below and not enough attack.
For my part, I have a micro prfre that captures correctly the attack and add the low end dansle legalization
to have the ds dpart a sound that is rich in low and becomes ingrable.

I use them mainly in my studio complment existing fleet.
I often add on a bassdrum SUBKICK complment in order to effectively dosed infra, sometimes I install a plutt Beta52A the style.
The static in the ride and the hihat.
I use a second pair in overhead (I have 2 bags) or if not in overheads and 2 neumann ST8-A1 pice far enough in capturing the mood.

In short, this case is a real Swiss Army knife.

It should be borne in mind that the whole audio chain is important:
microphones but also pramplis and costs, a drummer rgulier, take the time to properly place microphones, put down the battery (but not too much) and be careful the acoustics of the pice, leaves the correct as well.

I think this kit really intresssant trs, both for its price for its sound reproduction, overheads have 3 really is a plus.
The report qualitprix is ​​excellent.

I am satisfied with this purchase