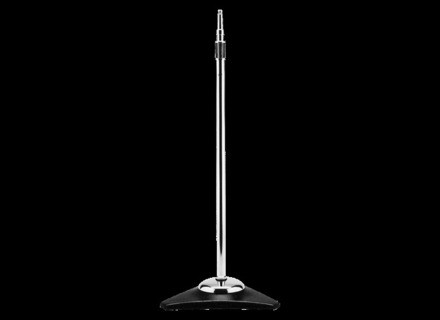 Atlas Sound MS25
5
The Atlas Sound MS25 is a heavy duty microphone stand with no boom and a tripod style base. While heavier than most mic stands, it will undoubtably hold your microphone down! I've only used the MS25 in the recording studio, but I can definitely see it being used on stage as well. They do have a version of this mic stand which has a boom, that is known as the SB36W, which is basically the best microphone stand out there. The MS25 is just as good, but without the boom. So while it might be less versatile, there are still a number of applications where this would be better suited than the SB36W.

Like all products made by Atlas Sound, the MS25 is extremely sturdy. If you're looking for absolute comfort when it comes to your microphones, and want to make sure that they won't be knocked over easily on flimsy stands, I urge you to check out the MS25 and other stands from Atlas. The MS25 in particular is a great model not only because of it's heavy duty nature, but also for the way the base of the stand is built. I find with the base the way it is, it is easy to move from place to place without a problem. Other less sturdy stands have the three separate legs in a tripod fashion, but I feel like those cramp up and can easily be knocked over if someone isn't paying attention, but with the MS25 this really isn't possible in anyway. No matter what type of studio you have, if you need a very reliable microphone stand without a boom, the MS25 is the way to go. If you need one with a boom, go with the SB36W. While you're going to pay a bit more than average for the MS25, I think that is worth it to at least prevent any potential accidents with other flimsier microphones stands - especially if you're a professional. Either way, the Atlas Sound MS25 is a great investment.
Did you find this review helpful?yesno
»