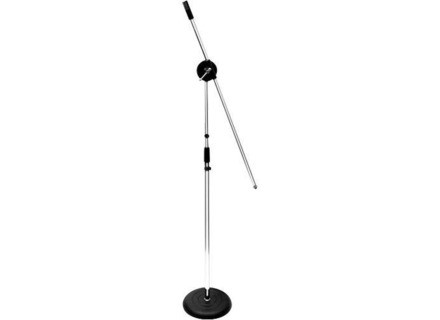 Hosa MSB-139
5
The Hosa MSB-139 is a microphone stand that can be used either in the recording studio or in a live situation. I've only used it for recording purposes, as I only do work in the studio and not as a live sound engineer (although I do perform). The mic stand has a base style bottom rather than a tripod, along with a boom arm. It is a pretty standard microphone stand, with plenty of room for adjustments. I generally like using trip stands rather than base ones, but this is weighted down pretty well so I feel secure when there is a microphone on it.

I've used the Hosa MSB-139 for a few different applications in terms of types of microphones and what I was recording with them. I have used it with a Shure SM7 on vocals, as well with an AKG C 414 on violin. It worked very well in both situations as I felt that it was easy to manipulate it in the ways that I wanted to. Some microphone stands don't have all the proper adjustments available for you to make, but this definitely isn't the case with the MSB-139. While perhaps not the most heavy duty microphone stand that I've used, it definitely got the job done well. The boom arm is easily adjustable as well and stays in place once you tighten it, without even moving the slightest bit. Having a reliable stand in place is crucial in a recording studio more than anywhere else for a few reasons. First, most of the time you're using expensive microphones that you obviously don't want to break, and also, movements in the microphone can throw off your placement and give you a different sound, which can be unfavorable to say the least. There are cheaper mic stands out there and more expensive ones, but I do believe this could be a few bucks less in an ideal world. All in all, you can't really go wrong with the Hosa MSB-139.
Did you find this review helpful?yesno
»