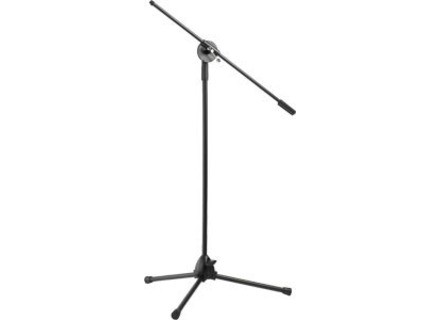 joe-bar's review (This content has been automatically translated from French)

In use rpete studio or even a man, no problem to report, for cons on stage that's another story ... The tripod down to the part which will consist of plastoc and pte all the time (which have already pt a foot mic understand).
But hey it's fairly intensive use on small scene with lots of people jostling for the price ... So ... it's almost all good
Did you find this review helpful?yesno
»

Famoussas_fr's review (This content has been automatically translated from French)

My opinion will be very fast! and very clear! It's m *** e.
I bought two for overheads.
I've used one once and then put in a box for the hardware.
Then I opened the box the round plastic main (center) broke down, the thread also smashed.
I make no clamping force, I have prepared well in the box.
Lightweight plastic ... short go your way I can tell you, you will lose your money.
Did you find this review helpful?yesno
»

Millenium MS-2005
5
What is a foot micro ...
not rising as high as my Stagg, to put a microphone singing (unless the singer makes 2.20m) is a suffisant.Pareil charlet, snare ...
Overheads for this may be a fair bit I think, but why not, it could do, we should in this case raise the boom to its maximum.

While the system is not as developed, practical and well as other damn feet (to the old system rather with small handle for tightening), but he made his taf, and I did not feel to have something in plastok or likely to fall at the slightest fart old.

I bought this foot Thomann same time as another command, and I do not notice the bottom ... there was no chance of a sudden ... 2 ...
This foot was not for me but for my mother, who loves to karaoke with her friends, she wanted to put his foot Behringer XM8500.
I felt it was not necessary to buy a foot K & M. In fact, for this use, it is enough.
However, I tested at home before offering ...
I put the dynamics of course, and do not worry, the foot is set well, it is stable ... in short, the test "soft" held nickel.
And even if it is not intended for AC, I've plugged my micro tube (T SCT700 bone) to see if he did not move too much, and if it does not collapse to a single once, with a mic rather heavy (750 g with the suspension). And I tightly several times.
And although the result was beyond my expectations, I put the mic in any position, even the most perilous, and the foot ... well not move it!
Surprising at this price! Although somehow I prefer to use other feet, but it works!

Quality / price ratio more than excellent! I buy an accounts or two to complete my fleet of foot, as for singing microphones, other dynamic or static small membrane charlet for example, it will be fine.

So if you want a good start, good manufacturing, sturdy enough for singing on stage or studio microphones, ben ca does!
Did you find this review helpful?yesno
»

BzhJulien's review (This content has been automatically translated from French)

I bought it to make overhead for not too expensive. I've been There's a good week. Well, I am not convinced by the system to put the pole. It is not very strong. Well sure you pay cheap but ... If it again, I would put 10 or € 15 more for the stuff that still seems much bigger ... I put 7 anyway because well, less than € 10, do not ask too much either.
Did you find this review helpful?yesno
»
Read the 14 user reviews on the Millenium MS-2005 »

Other Millenium stands/Boom Arms for Microphones