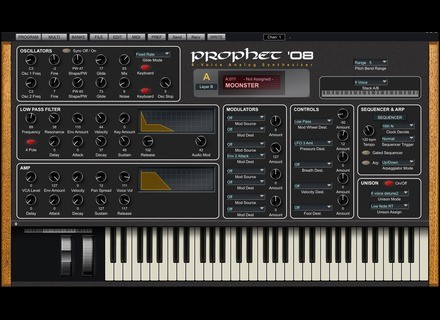 ANANDEVA's review (This content has been automatically translated from French)" The best of two worlds!"

Soundtower Prophet 08 PlugSE
5
Installs as a VST plug'in. According to the DAW and least equipped as Ableton Live, add an audio track +. A hybrid when the tracks but that's another discussion ...
It must then parameterize the MIDI in and check some of plug'in management options with the "host" software. For example, and this is Top, we can record programs within the DAW VST without having to store it in the P08! It radically changes the speed gives the work level.
Pdf manual is good, but mostly descriptive.

I use plugSE mac and pc without any worries. I am very impressed to see how much latency is non-existent in MIDI ... It's peninsula 'as fast as plug'in. I must say that this is a DSI, processors are recent and therefore fast and at the same time, Dave Smith is a bit inventor of MIDI ... I also use the plugSE dedicated to Moog Voyager and it's no surprise, pitch perfect!
PlugSE manages the total edition synth with Sysex and / or NRPN model as well as the main controls DC. This little world is updated in real time by navigating with the mouse at the plug or directly on the P08!! This is great. In addition to all the automations are there, with their name, woawwww. No manual with the list of CC numbers for the cutoff or attack envelope filter ...

For my part, I am frustrated since SoundDiver Emagic has not been developed (thank you apple have all screwed up) to keep the spotlight on plug'in. But it changes slowly. The integration into the DAW is the future of hardware that comes gradually but still too few manufacturers offer these gateways VST / MIDI. Shit what everyone uses the DAW now be stopped with controller numbers 0-127. Coup de gueule also Ableton that does not even include a filter to pass sysex messages .... Which would MaxForLive with manufacturing its own full publishers. (And ultimately replace the super duo of the time: Logic Audio & SoundDiver)
Good news though, Elektron gets going with its technology "overbridge" (no output to date) and even in the pro audio, a French manufacturer Audiotouch offers with its compressor plug a MIDI control .
All that to say that SoundTower provides serious with their plugSE and I would like as they offer many plugSE that there synths!