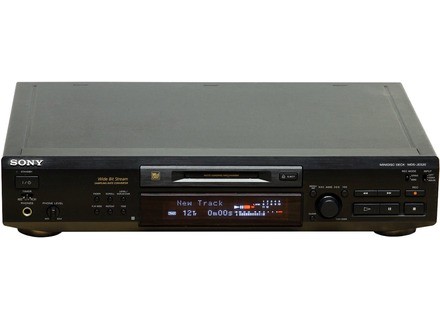 MDS-JE520, MiniDisc Deck from Sony in the MDS series.

CROPUS's review (This content has been automatically translated from French)

What I like the "PLUS is" SOUND !!!! SUPER ", a" FISHING "
over the entire bandwidth I find nothing to do with the ("MP3" blah!)
What I like the most is that we almost can not
meters fingers knew the disc, so there is less possibilitbr /> scratching and it lasts much longtemp a cd.
What I like least is the fact that the disc rotates, it's a bit dificil I find to be the prcis rglages during edition, but you get used and it works !dropoff window
Not to be able, like a CD, do save on average, only about fifteen moceaux!
And no coaxial digital output!

I never tried other ais MD before!

I bought this model in 2000frs 98 I think, but after so many years without any problems, not once in rparation, and I use it very often, I SONY say hat!

I would do this choice without hesitation and I the same advice!
Did you find this review helpful?yesno
»

jaminou's review (This content has been automatically translated from French)

Sony MDS-JE520
5
The top of md, it's been years that I use, I think of leaving, I have always, it works very well if it again two mdsje520 excellence
Did you find this review helpful?yesno
»

Sony MDS-JE520 manuals and other files