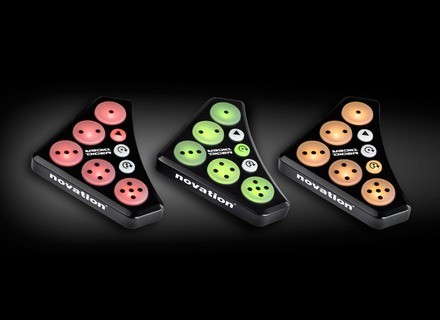 Dicer, Other DJ Accessory from Novation.

Locking into the Technics SL 1200 series’ 45-adapter hole, the two Dicers place backlit soft-touch ‘dice’ buttons where they’re needed - on the decks, inches away from the vinyl.

Dicer’s 45-adapter mounts also detach, and with Novation’s reusable ‘DJ putty’, they're designed to slot into any DJ performance set-up, sticking onto CDJs, the mixer, your laptop, or anywhere you can think to put them.

Dicer is plug and play – there are no drivers to install and no setup required. Load up Serato Scratch Live, plug-in your Dicers and you’re ready to roll. For the more advanced Serato Scratch user, 20 extra functions can be assigned however you like; triggering samples for example.

Each Dicer features five ‘dice’ buttons that hook into cue point and looping control within Serato Scratch Live. You can jump between three performance modes at the touch of a button. The first of these is ‘Hot Cues’. Each of the five triggers can be quickly set to different cue points in the track, ready to be triggered at will.

Dicer is also ready to control Serato’s ‘Auto Loop’ and ‘Loop Roll’ functions. In Auto Loop, the five ‘dice’ buttons are assigned to loops of varying lengths to be activated during playback. Loop Roll takes control of halving the loop length, with five steps assigned to the five buttons, from 1 beat down to 1/16 of a beat, delivering the ‘stutter roll’ effect popular with today’s digital DJs.

Dicer is also MIDI assignable. The five ‘dice’ buttons combine with the three smaller mode buttons and a shift feature to provide up to 60 functions from a pair of Dicers. These can be assigned to work however you want them to, within almost any DJ software, including Traktor Scratch Pro. They can also be used to control a standalone sampler, trigger drum software, or even browse through your playlist.

Dicers come in pairs and work over a single USB port, with a mini jack cable to transmit data and power between them, providing dedicated control for each deck over a single L-shaped micro USB cable connected to the computer.

With Dicer, setting cue points and triggering loops is now closer to hand than it’s ever been, helping you take your DJ performance to the next level. Finally you have the control you need, where you need it, ready to make the most of your Digital DJ software.

According to Novation, here are the key features:
• Performance buttons with visual feedback
Backlit multi-colour soft-touch ‘dice’ buttons, ideal for performing Cue point and looping functions, provide constant visual feedback of their status.
• Locks straight onto the Technics  SL 1200 series, and similar decks
Using the 45-adapter hole, Dicer places looping control right where you need it - on your decks, just millimeters away from your vinyl.
• Working on CDJs and beyond
With Novation’s reusable ‘DJ putty’, your Dicers can slot into even the most cramped of DJ performance set-ups, sticking cleanly and directly onto your CDJs, Mixer or Laptop.
• Default set-up for Serato Scratch Live
Dicer is pre-programmed to take advantage of the cue point and looping functions in Serato Scratch Live, including ‘Hot Cues’, ‘Auto Roll’ and ‘Loop Roll’.
• Works with all major DJ software titles
Dicer is fully MIDI assignable, so it can be set up to control almost any software, including Tractor Scratch Pro. Up to 60 assignable MIDI are available from a pair of Dicers.

Secondary features:
• USB bus-powered
Dicer gets all the power it needs from a single USB cable, with no need for an external power supply. A mini Jack cable transmits power and data to the second Dicer.
• Ready-made setup files for other DJ software
Quick setup files for the major DJ software titles, including Traktor Scratch Pro, are available to download for free from www.novationmusic.com
• A Fully class compliant MIDI device
Dicer is a plug and play device. No Drivers are required.

Check out www.novationmusic.com for more.