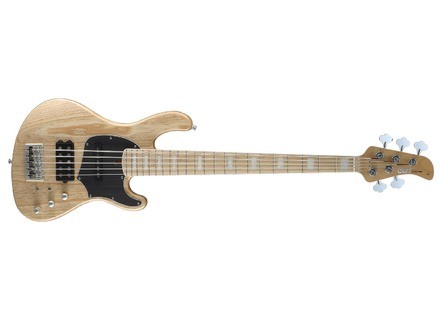 GB75, 5+ string bass guitar from Cort in the GB series.

Cort GB75
4
Canada maple neck.
It is clear and fine, even on the rope Si short, it forgives not approximations but advancing quickly.

In recent years, active / passive switch has been abandoned leaving a cut mediums.
When shooting in hand, we say that it is good for the slap but soon you realize that it also cuts the brightness of the treble. So, it's just nice for the dub and more "acoustic" sound ... on the other hand, it boosts the volume because there are more serious!
Adjust bass becomes really important only at the end of the race. So I tend to leave everything flat on the bottom (in general) and arrange the EQ on the amp that is more accurate.

The finishes are clean enough although I regret the dawn between the body and the screw and some frets ill-fitting sleeve. At my level, it does not change much to the overall sound and you can not ask a luthier finish on an instrument made to the chain ...

For the rest, the details are already given on other reviews and the manufacturer's website.

Having played only 4 strings to handle very, very late on electric and a little wider on acoustic, I got very quickly to the new width of the handle. After that, it's just a matter of practice with a 5th string.
Small hands will not be affected.

Natural as retouched (multi-effects along the way), I found a great versatility to this Cort and this is exactly what I wanted.
I could not try the 4 strings in store and went through a store in the south of France to find version 5 strings with internet. Fingers crossed for it to be the same level ...

Typing a little in different registers (Rock, Pop, Funk ...), I find my account with this instrument.

The big downside I just find its sound is its natural abundance in mediums. The sound is definitely modern but gives the impression of a permanent natural saturation. A bit like a Gibson Les Paul in the clear! And on different amps or live in tables mix. It corrects the equalizer but must grope.

I would take the time, when my finances will allow me to study the best config electronic / micro to give it the depth it deserves because the wood is very good. One thing is for sure, the only switch will return to the active control / passive.

Updated in 2014:
After a little shrug re-microphones and parallel connection of the block (which is set at the origin), the sound is much more balanced. JB allows you to walk in the woods and vintage sounds while the MM gives a lot of attack. Both handsets allow to obtain a warm and round sound without losing sharpness.
The small switch is actually very useful because it acts like a compressor and just activate it to inflate its passages for slap (for example)

Lapped well over a year, I am very pleased with this acquisition.
I tested the few 5 strings found in stores by me and some 4 string that I knew I could find 5 string elsewhere (I would have preferred to support local shops, but when they do not move to , there's nothing more to do) and value for money, this is really what I found most compelling for my limited budget.

Once again, to find HIS instrument must try several. This Cort is still more groove oriented than metal but can also provide a wide rock record.

Updated in 2014:
Apart from the above mentioned settings, the config is the original. I still love its effectiveness and versatility (a colleague who only plays instruments luthiers told me to have been fooled by this Cort). But I keep in mind the improvements I had planned to do.
Finally, I highly recommend buying a good strap for it is not light and it feels after long sessions. However, I am still fun to play.

moustic70's review (This content has been automatically translated from French)

Cort GB75
4
Made in Korea, microphone in cort. A simple and serious type Jazzbass pav in acute type MM
knob a volume that is active / passive
knob a micro balance
and a concentric knob rlage (active) high and low.
Two swtich with little Intrets.
Handle well off, normal for a 5 string.

The handle and a touch of extraordinary, and smooth it slides all alone, a true rgal. Round top, it flattens quickly to acute trs.
body shape and style jazz bass. In frne, making it a relatively low lgre.
As for the rglages is relatively complicated it needs to be done.
more when one is passive, there was more than the balance of microphones. is limited.
the first switch boost the mdiums
The other splits the humbucker.

It sounds strong and trs trs beautiful.
must be same as the AIM sound sharp, if not pass the road.
For the slap is a rgal
For touver sounds round and warm, no problem is all the pots in the grave.
As for my amp, that is a fender rumble.
In short, it's bass whose sound is reminiscent of Marcus Miller. We like it or not, but it does not leave indiffrent.
cot a humbucker, it is not a TRS moves away musicman all proportion guard.

I use it for several weeks, I have a ds EARNING things of the instrument, but I'm happy;
The report price is trs good quality.
For the price I referrer this choice, except that over time I think the 5-string, it's not for me.
besides, I'll sell it to buy a four-string, and probably a GB74