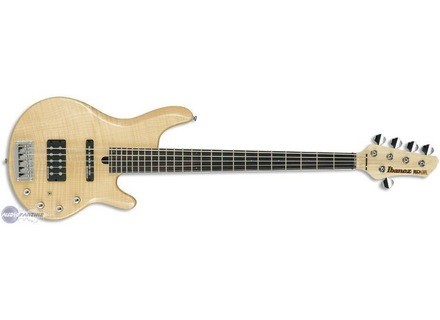 RD905FM, 5+ string bass guitar from Ibanez in the Roadgear series.

Ibanez RD905FM
5
Maple _manche
_touche Rosewood
_Table quite thick maple (about 2cm ... a very beautiful appearance)
_DOS mahogany (well ... a wood called mahogany but that many would call luthier plaggia ... in any case, it is far from mahogany used in Gibson or PRS legendary reputation for their selected wood ) of equivalent thickness at the table with intermediate sheet walnut.

_2 Bassline pickups (Seymour Duncan) / Ibanez, a humbucker in the bridge position, a single coil in the neck position.

Everything is pretty well done, the finishes are quite correct.

The neck is thin enough and round for a 5 string, bass is easy to learn and access to acute is excellent thanks to the generous lower notch. The one I tried was an action of rope about 5 mm, usually I play with a very low action, difficult to judge what would be the instrument (especially for frizz ...) with a control more "end" less lumberjack. The weight is relatively large, while remaining reasonable, it smells good violin, the imposing maple top is to be there for many.
standing is well balanced, no complaints.

I think his only fault is definitely its look unattractive ... it's a matter of taste, of course, but I never fell for this low for its aesthetics (a little lazy Ibanez designers, especially for lines of the head ... Yuck).

Big highlight of this bass. Tested in a Combo Fender Rumble 100 watts, even when we feel honorable capabilities of this 5 string. The Bassline microphones offer incisive to pick, not missing bite the finger but too high string action did not allow me to test the fine on a significant slap.
Equalization and electronics in general are very versatile and efficient, the fact of the passive switch is of little interest ... In any case the difference is not audible in the combo Fender, other well sure that the switch has the effect of stopping the equalizer. This is perhaps one feels the limits of current Japanese violin: where the woods used come?

Micro balance allows to play sounds but does not provide absolute versatility; indeed the pickup is much more powerful than the neck pickup, which brings just a little body when playing on two simultaneously. I usually play a Fender deluxe PBass US, the difference in sound between the two microphones is obvious, the Ibanez nuance is thinner.

Flat and it is often the case for 5-string bass: bass SI are not clearly defined, yet was new set of strings on the instrument that I tried.

I tried a model at a very attractive price (...) then it is found about 950 € at Thomann, in this case the matter was very interesting. I was pleasantly surprised by the excellent quality / price of this 5 string. Electronics for many plays in the final rendering of the instrument sound but I doubt that the years are enough to bring the violin sustain a higher-end model with a competitor.

In the end it's always the same, I mean a test facing the amp, and fine enough performance nuances ... As a group, this bass has very honorable and largely sufficient performance in many registers. Rest this look ...
Did you find this review helpful?yesno
»