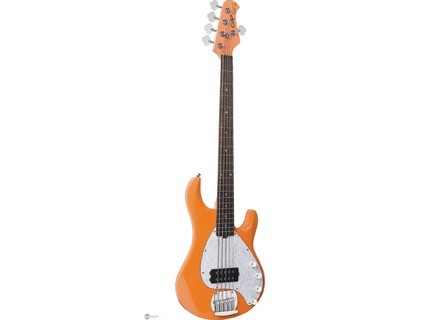 slipknot_jackson's review (This content has been automatically translated from French)

Olp Stingray Tony Levin Signature
5
I have to try this bass is very defined by its qualitée of his! if the bass is very well defined footwear that we do not all the neighboring lower that price! The handle is nice asses strings are available because in general they are very close. Particularly surprised by the line (music man) are very affordable for low quality.

Impressive sound so bad for her prix.Le is very well defined.

Serious, serious matter! I will say a Retailer + but every note sounds, versatility is the sustain and holding also note! Not to mention the EHJV!

Excellent Q / Price (I tope Specials 330 euros, the c'tait dernire!
Did you find this review helpful?yesno
»

Emilek's review (This content has been automatically translated from French)

Olp Stingray Tony Levin Signature
5
- The bass was manufactured in China. The woods used are: basswood for the body, maple neck and rosewood for the key. The body and head are painted in a funky orange color. The white pearl pickguard goes very well with it.
- The neck has 21 frets and a microphone type humnbucker MusicMan 5 string.
- A bridge type also MM5.
- Electronic active (3-band EQ): volume, bass, mid, treble. A door is attached to the back of the bass, which makes access to the battery much easier.
- The handle is typically a 5-string MusicMan handle, thick enough.

I put a ten because I have identified no default or for the varnish, or adjustment of the handle, or polishing the frets. For the price, it's perfect.

- The handle is very nice, even if it is thick enough at first. This is my first five strings, and I play a Fender Marcus Miller otherwise, which is precisely the opposite: a very round, very fine. However, the change does me more a problem after a few hours taming of the instrument. The small detail that remains to me is the gap of 16.5 mm between the strings (against 18 mm on a four-string), which is him, the more confusing.
- Access to treble is very easy. It happens only rarely needing to go to the 19th or 20th fret, but it's something quite easy given the large indentation in the lower horn.
- I noticed after a while playing a tiny imbalance in the head rather heavy, but it's really to say that ... In fact, we do not feel at all, and there was no effort required to keep the handle up. The shape is that of a MusicMan, very ergonomic, very pleasant sitting as standing. It is lighter than my Jazz Bass, basswood body with very light.
- Whatever the setting, it still has the grunt who takes the guts and I like permanently this low! Playing with the EQ, one passes easily between the deaf to sound slamming. This bass has a lot of midrange, it's wonderful!

I put eight because of the reduced distance between the strings that I have a little problem of adaptation, but otherwise I really do not fault!

- I play a little bit of everything: the big rock that spot, blues, some jazz, funk, baroque. It is best suited for music punchy: this bass sends the potato! It is a wonder to rant about rock and funk!
- I use it repeatedly in a Warwick amp with 2x15 cabinet "homemade. At home, I plugged into a Yamaha sound system Stagepass. In both cases, overflowing personality of the bass is heard! Although j love it especially the clear sound of a bass, I use some effects, namely a bit of everything: distortion, overdrive, fuzz, autowah, chorus, flanger ... she is doing well!
- This is the best copy of StingRay I tried to date! It has, therefore, a lot of the personality of its "big sister" an aggressive, a bit fat ... Briefly, this discontent! With EQ, you can have a bit of slamming (necessarily less than the rosewood version of the Maple version.)
- I love all the sounds of the bass. There is none that displeases me, or even just leaves me indifferent. I love a whole. It's good to have a bass on steroids, from time to time!

- I use it for two days and I am totally overwhelmed!
- I love the look, sound, ease of confusing the low (you plug -> it sounds)
- I tried many basses, five or six strings, and each time I was disappointed if serious: no fishing, no taste ... or when the handle is too thick for my taste. And then I tried another version of the PLO (the version with key table and maple), being a big fan of Tony Levin. I was amazed, but at € 653, I left the store empty handed. I did not put that much money in a bass that had no immediate use.
- With experience, I would do of course this choice!
Did you find this review helpful?yesno
»

PHallen's review (This content has been automatically translated from French)

Olp Stingray Tony Levin Signature
3
A Low Made in China, with saddle and handle rosewood fingerboard, nothing really extravangant in short, as 95% of the lower neck is really asiatiques.Le pais for the 5-string, it will do or you go your way.
The body is covered with orange paint that does not go anywhere unless you inaperu your collection in a disco.
The pearl white Pickguard mimics that of Musicman, but the cost difference is visible.
One type of micro Musicman (they could have put in second for added versatility.
A prampli active (eq 3bandes) adjusts the volume, bass, Trebble and mediums.

The bass weighs his weight, and was immediately a little frightened when moving his hand around the handle. Little hands will have to grow or change low. For me it's not a major concern, used to play on the sleeves well fed.

I jou head with a Gallien Kruger on the Peavey Tour 450, but also on the smaller amps (Fender Rumble ...). It sounds, but are not really a sound quality as vritable musicman stingray that is supposed to try to emulate.
The same pramp did when his job well, and ultimately allows the sound to match the color of the machine: it is a low to the funky. Mtalleux, hardrock or reggaejammers, prfrez a turn to other models or another brand, this is not what one might call a versatile bass.
However, the rule is really easy pramp .. at the same time there are no buttons to turn 10.
I really think that a second micro t have a good idea, but PLO's mission is to provide low cost low.

A concern for cons, in the studio. The volume of your bass should be down on your button pramp because it sends the pick in between the direct and the console stores a "pseudo saturated" after which you attack the fawn rope.
It is very unfortunate, especially since you will have much mmoriser the position of your volume knob or not to touch it if you take a break from your record.

I will not deny that I eventually just the silent sound of the bass, because on some forums it says that good, but it's ultimately more of a low "transition" between your first Low learning and your low prdilection. 280 A New, yamaha it some competition, it's a good value / price as it must be recognized that the cost is really low (it was in the dpart around 450 new, but the mag 'l' dropped because it was selling certainly not good, and it does not fawn all worth it, the 450, compares the competition).

However, it is a pretty low, even if that sounds correctly.
Did you find this review helpful?yesno
»
Read the 5 user reviews on the Olp Stingray Tony Levin Signature »