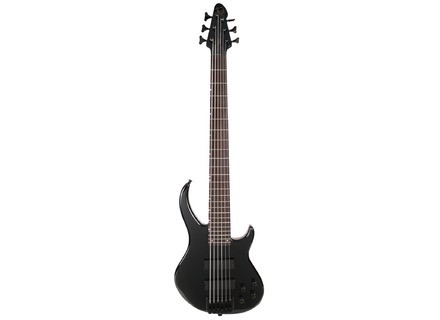 jonfire's review (This content has been automatically translated from French)

Peavey Grind Bass 6
5
Made in Vietnam (o of its low price)
24 frets, 2 humbuckers that make the case
, 2 volumes, 2tonalits
the handle is through (in a pice on which
has added two wings)

The handle is very well, it's not a highway, just a
low normal with such a serious rsons in the stomach,
ibanez bass like no ...
Access in acute is perfect as additions to the wings
through the handle are ergonomically tudies t;
the back of a beautiful t dig it fits perfectly to the body;
the strings through the body and thus transmit sound directly
the instrument, the bass is passive and therefore has a warm sound without
agressivit, plutt roots so as his;
I just added a prampli bought on AudioFanzine Bartolini,
and the high class bass sounds great, it has
punch, ideal slap, tapping, funk;

With prampli addition, it should this time perfectly
my game-tapping groove, the neutral prampli trs respects its
This excellent violin, and as I have a semi-mdium paramtrique
prampli on, I can have sound super round, brilliant sound for
funk, or the ultra-aggressive in mdiums, trs particular play
fusion-jazz-rock;

I've had a week, she has plenty of default (with a stick
PEIT bump the rear, a little micro dcoupe summary, small
pet on the head), but we feel it makes the hand t
(And thank the maker who thought that low trs ergonomic
remains plusqu 'upgrade to the electronic music possder a bomb)
* Paid 369 euros including shipping from the team of trssrieuse Playback,
it does certainly not crying over the little ones default;
report quality unbeatable price;
TRS is a good low but not low easy, he must be
communicate the energy and support its weight!

capillotraktor's review (This content has been automatically translated from French)

Peavey Grind Bass 6
3
It is a low-Vietnamese, 24 frets, pickups Peavey soapbar, with volume and tone with microphone. I can not remember the brand of the bridge.
She is very beautiful, clearer than what you see in the pictures.
The neck is very flat, it&#39;s literally a board, the exact opposite of a Fender neck, personally I like a lot, after a period of adaptation monstrous possibilities it offers in terms of play and agreements including so I think quite suitable for a 6 string.
You can specify that it is a neck through but honestly in this price range it&#39;s no use, for against that gives it a little air longboard

Just remember not to climb through the ropes in how precisely it gives better sound dixit my luthier, the bridge allows both.
The big downside of this bass, which motivated my Resale finish. This is a Vietnamese coffee at 400 euros. So the shrinking sucks, blah the bridge, and the action too high (could not set it as low as I wanted). The cut is a little raw, too, especially around the microphones. Matt varnish but I like (still in the delirium surf). The quality is rather in the violin and the sound comes out. The pickups are good but not perfect (passive Peavey, small difference of diet on some strings). Apperence replaced with Bartolini is a very good choice.
Chronic problem of jack that is loose on mine.
I think rather light for a 6 string.

The handle, though large, is very thin and allows all sorts of tricks of the fingers. Physical but effective and open to all. After all depends on what you do on stage, you should more I think if you&#39;re like, "I groove on the spot" rather than highly charged rocker that draws in all corners of the stage, I personally have to do both and I confess that mode "I jump around" I slaved at the beginning, I made bread on bread price to pay for his flat is a bad decision in the case of movement.
Access to all of the boxes is optimal, cutting leaves a very good access to acute.
The cutting of the body is quite nice, however the balance is through, she leans her head. It will take a good big leather strap (I paid 50 euros but mine is a great investment if you play a lot and you&#39;re tired of shear shoulder at every concert). Sitting unplayable.
The strings of origin had a low shooting and was the best config retrospectively. For sound you have to work a little, it&#39;s a 6 string with its roots so depending on what you are looking for you may find it right away. It will play on the attack, microphones and amplifiers.

For a year I played with all: jazz, funk, rock, reggae ... there are things she is very good, like jazz, funk, afro: it&#39;s naturally a very warm, rich mids, and others where it is lost, such as metal or even slap ( not his vocation). Between the two there is rock and reggae, as it does the job no more.
It is a passive, so it means two things: simple settings, no problems with battery and some natural warmth in return in concert you are completely dependent on the amp. Do not even try to play live in the DI (yes, I know ...). Depending on the amp it can be very simple or very complicated: I have galleries with Hughes & Kettner or SWR by Fender against it on the big Panard: it reveals all its warmth and dynamics. I recommend the series Bassman, very effective. Basically it has a warm and fat you need to know tame. Depending on the shooting can be serious if the drooling. The high C is very nice for cons. Should test it with a preamp type II Microbass I think it would do wonders.

I for one year, purchased 370 discount on a site at the time it was sold 400 euros, 500 list price so I was happy with my purchase. In practice it is a mistake to buy that kind of site, unless you know exactly what you do: supplied naked without the cover (and this problem: it exceeds all the covers I&#39;ve tried !), incorrectly set (but that&#39;s normal, the first thing to do after you buy the guitar is a good setting, just there you will pay at a luthier instead of having the seller Free) and zero warranty. Well you learn, this bass was a bit of my trial by fire, it was sort of my first bass, although I had played six months on a 5 string Jazzbass tampered with before. She did exactly what I asked him, I wanted to start directly on a 6 string for not having time to adjust starting from a 4 string, I am a pianist it has to come from there

Finally I also want a Jazzbass in addition to 6, the felling is not the same at all and it&#39;s interesting too. In the end I worked like crazy on it and I am happy with the result. It&#39;s a good bass line early, ideal to start the 6-string without breaking the bank, taken as such it is really interesting, especially at current price (300 to 350 depending on the site in August 2008). I can not be objective about the quality, I lived a year with and can do great things with this stick, I got everything I could, but I m ​​&#39; separates for a mid-range model more pro: an Ibanez SR 506.