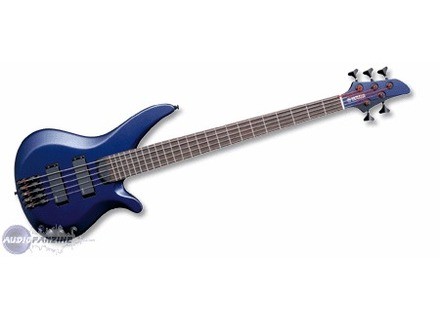 RBX775, 5+ string bass guitar from Yamaha in the RBX series.

Yamaha RBX775
5
I purchased my instrument at Vine Music in Evesham for £415 pounds. I decided to buy it because I am a Muse obsessive and I've seen Chris Wolstenholm playing the four string version at the NEC and it was awesome. Listen to the track "hysteria" on their album "Absolution" to hear the four string version, which is practically the same, in all its glory.

I have only recently purchased this bass so have not yet put it through its paces. My bass is in the metallic blue colour and looks gorgeous. The extremely pronounced shape of this guitar gives it a slender but aggressive look, and the pick ups, tuning pegs and bridge look very contemporary and stylish. The volume and treble knobs are in black as well, with rubber grips to allow easy, smooth operation. The pick up selector and active switch are also stylish and cleverly concealed. The whole guitar is just amazing to look at. When I was handed it in the shop, you could hear everyone in the shop saying how good it looked. Another point that I like about it is that as well as giving a great rock and metal sound, it also is great at jazz, blues and funk, with some really deep notes possible and high twangs to contrast them.

I know that everyone who owns this bass says the same thing, but you can't help it. There really is nothing bad to say about this guitar. It looks beautiful, plays beautifully, and kicks out an amazing sound. Having played solely on a four string for three years, it was hard to get used the initial transition to five strings, but with a bit of practice you easily get used to it. Also, when you first get it, the strings will sound quite tinny, but after about a week of use it will mellow out into the bass of your dreams.

The construction is sound. Hardly any plastic is used. All the knobs and switches are robust, and the jack input is well positioned to prevent the lead being yanked out when your having one of those spin the guitar around your head moments. The black bolt on maple neck is pure quality and gives you 24 frets to play with. The alder body is durable and stylish, and the matt metallic paint is virtually impossible to scratch. The humbucker pick ups give out a clear, sustained sound and can be used to their full potential with good amp.

A fantastic bass that will last you for ages. Will suit most types of bass player sound wise, and will aesthetically please you for years to come. I've never felt better about parting with a large amount of cash than when I bought this.

Yamaha RBX775
5
I bought the big boy, as its affectionately known, from Music Academy in Nottingham UK just over a year ago. I had been looking for a long time for something to replace my Aria, it had to be loud, fat, sexy and with 5 strings, after reading several reviews i decided this was the one for me. I paid £465 over the counter for a silver model although i did want black.

The sound of this bass when its turned on is something to behold, the bottom end punches its way through the usual accompanying wall of sound that is two Les Pauls and Marshalls which like to be called 'guitarists' in my band, giving me an orgasmic cross of percussive and rythmic control along with a tone quality which until now i thought only the big boys had. I come from a Faith No More, Primus school of thought, so you know what I'm talking about.
I have only ever needed to use the big fat front pick-up but the back one is nice to have there in case i need something to put my beer on!
The other really important selling point of this bass, which will sound really really shallow, was there are no inlays or marks on the neck!
Playing the RBX775 is always a breeze, the neck is wide for the 5 strings, enough that there is plenty of room, but at the same time the neck is not too deep for people without the obligatory hands-like-shovels.

I thought the bottom cut-away could be a little deeper and a nicer shape, sometimes its difficilt making it to the 15th fret in time and doing something constructive with it.
Oh listen to me, sounds like i know what i'm doing!

The first thing that hits with this bass is it is solid, heavy and well built, if it was a woman she would strike out at a good pace, wearing brogues and a tweed suit saying "jolly Hockey Sticks" loudly, don't worry, its a british thing. The back of the neck is nicely matted to stop that sweaty-stickyness that appears on varnished necks with a smooth and positively skin-like finish, making it something almost fetish-like to the touch.


After gigs i quite often have people comment on the bass sound or ask me what effects or filters i use, when i tell them its the bass and a big amp and thats all they always look shocked.
Sometimes i wish i was out front so i could enjoy how good it sounds too.

Yamaha RBX775
5
I saw it in a Musician's Friend and I loved it. I ordered it through my local music hook-up at MusicQuest Stevens Point, WI (act like ya heard!) I got it for $650 American. Gotta love active pick-ups.

As I've read in other reviews, there is pretty much zero humming from this bad boy. It weighs about 10 lbs, which is good for me. I like 'em heavier. It's got a 4 bolt-on neck. The bolts are farther apart so it has more stability/sustain. It has a built-in parametric EQ, apparently modeled after the NE Magic Box. I have one and I agree, so you save $70 on that end. The volume and tone knobs are high-quality (so much so that you need the included hex-a-wrench to take them off) and have rubber grips. It comes in blue, black, and SILVER (guess which I got). Great tuning, no fret-buzz (if you do it right), and an all around fun 5-string to have. It's got a solid alder body and a maple neck (Fender?)

Not a lot to cry about. To be honest, I don't use the bass-boost switch at all. It's more of a slight volume boost. Some might complain about the weight or the limited color selection, but they should probably hit the gym or drink some beer.

This was put together with love and care... but in all seriousness I've had it for over a year and it still looks good (and I'm abusive).

There is no valid reason not to buy this bass. If you want the 4-string, then that's fine too. The price and the product are well matched and I don't plan on getting another bass anytime soon.

This is agreat guitar, Firstly it has two great active yamaha humbucker pick ups so there is absolutely no "noise" at all, You have to play string to know if the volume is on even at high volume through my 300w trace elliot amp! Any one who has every tryed a five string bass, will understand the benifits of a 35inch scale(the B string is not floppy at all), And my only other consern with moving to a 5 string was the width of the finger board but this is an absolute dream to play, I like to play a mixture af rock and funk jazz and the manuvourabilty on the figure board is great, it doesn't feel cumbersom like some 5 strings can. The available tone which you can get out of this guitar is great, especially the tone of slap and pop you can get, there is a three way pickup selctor for the 2 humbuckers and also a bass boost switch for the extra bit of bassists ego in the middle of a gig(good for soloing in jazz). And lets be honest I just looks gorgous!!!!(i have the silver one.)

Well this is hard, I absolutely love this bass, I'm not even on the "new bass high since I've had it for over 6 months now. My background is that I got this during my year out in which I was playing in a band touring around the UK and europe doing at least one full headline gig a week as well as playing smaller promotion gigs almost every weekday. so As you can see I've certainly put this baby through the works and I have no let downs!!! My only bad point might be that it has no built in eq which these active basses often have but since i use a trace elliot amp with 12band eq and compress etc this has not been a problem at all.

This is a very well built bass. As I said in the "don't likes" section I got this basses on my year out so it was moving from city to city every week making regular trips across the irish sea and it was as solid as it looks even after all those van packs. It has an alder wood neck and a beautifully smooth maple neck which allows easy movement up and down the 24 fret fingure board. The bridge has 5 individual saddles which are very easily set up for the perfect action and set-up. The active circitry on with the 2 humbuckers gives great tone and allows tone for all styles I've tryed from Heavy rock to trad jazz to church band. It is a great quality bass that also looks great (I'm not so keen on the bog standard precision looking basses and this one has lush contores with out going too far and looking stupid.

The bottom line is that this is great bass if it was stolen I would deffinitly replace it even if I was forced to pay full price!! However I would recomend looking at the Ibanez MQ aswell if your looking for a 5 string bass in the £500 price range as this is also a great bass(play before you choose). As you can tell form this review I love this bass and I can say that only bass I've ever played which I prefered was a £3500 original(pre gibson) Kramer which are way out of my price range. This is a very high quality bass that is half the price of most basses which it plays like, a deffinite 5/5.

This review was originally published on http://www.musicgearreview.com
Did you find this review helpful?yesno
»
Read the 8 user reviews on the Yamaha RBX775 »