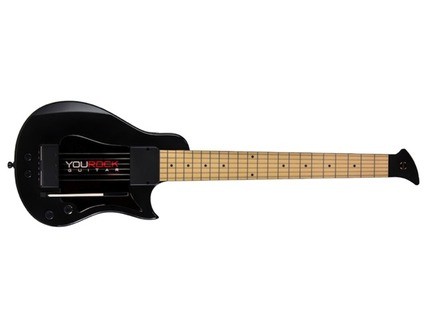 You Rock Guitar YRG-1000, Other Electric Guitar from Inspired Instruments.

JMB.Studio31's review (This content has been automatically translated from French)" Not bad but should not dream"

This is not a real guitar. The bottom 6 strings are not real strings. It's a little weird not having better imitated the ropes. The sensitivity of the sensors are averages strings against the sleeve by the sensors are highly sensitive and specific.

I use it only to transcribe chords midi DAW to optenir a real guitar chord and not that of the piano. I do not play the chords really live (precision sensors ...). For cons, I do my solo guitar (always like to have midi.)
before using a VST as acoustic guitar ...

It fills somehow his taf. A little expensive for the lack of sensitivity of the sensors.

Inspired Instruments You Rock Guitar YRG-1000
4
Hello all =) So here we are, for those who have been engulfed in another space-time these last few months, to a toy for a new style: the MIDI guitar / video games (rock band, guitar hero ... ). With no X-box or another, I will address only the first aspect, said this! Some technical features: - 6 String - 1 vibrato - pot. and volume pot. which can be assigned to any MIDI Control Change command - Output USB MIDI minijack - Integrated Sound - Removable handle for transport - Various tuning options - control panel to adjust many parameters - Hammer-on, legato playing, slide ... But no bends! (By practicing it gets there well with this rod-dit ^ ^)

This guitar is made of two pieces: the neck and body. The handle: so beware, they are not really "strings" within the meaning of vibrating strings. They are indeed attached to the handle, and finger pressure is above that activates the note. It takes some getting used but not unpleasant. Cons attention by the handle is much shorter than a standard guitar neck and frets are spaced less ... On the stroke is not realize it but by returning to a real guitar that says "hey, indeed!" All boxes are accessible without problems. Body: here are mounted on 6 real strings scratch and can play the plectrum or finger without too much trouble. Finally ... I come to the main problem YouRockGuitar: sensitivity strings is really not optimal. It is doing a little better with the firmware update in 5 minutes by dedicated application, and adjusting the gain of each string on the control panel but it is far from perfect ... It lacks a lot of notes, and others are duplicated. Engineers have the undoubtedly realizing it because they developed the method "Tapping" the touch of a button, no need to scratch: the pressure of the left hand on the handle activates the note. (The ropes are still active scrape that being said, but they are only useful for playing the strings). However, attention to the tapping mode, it is surprising at first, in fact: Suppose on the high E string you have your fingers placed on the footnote 5 and Note 7: by raising his finger in footnote 7, the Note 5 locks automatically! Second point: no variable speed tapping mode (normal mode, it is determined by the intensity of the blows to the ropes). But we can fix it in the config panel. Then at the game, once you get done is a breeze, the race will really alone! Just be specific and support a minimum on the strings may have notes that snap-interlock and dice. In addition, there is really no audible latency (finally no more than what your computer!)

The sound ... we can not say much. Sounds very well go inside for fans of Casio keyboards and 30 € at Aldi ... With some circuit bending it might be interesting, but in the meantime ... No, the interest is in managing synth (or real ^ ^), and there is a real treat! Personally, I use it a lot with SYNTH1, a simulation of Nord Lead free, it can happen to be scratching sounds a bit electro sounding really not bad. But no problems playing the piano, strings ... Besides the use of tapping mode allows you to train without too many problems in tapping with both hands, or can make a low hand and the rest of the other ... Note: you can assign a midi channel per string, to play VSTs simultaneously by 6 = p I am therefore forced by AF to a note, I can only note that the internal sounds ... And there ...

I played a lot since I received it in mid-January: then, obviously, is far from being the ultimate MIDI guitar, but apart from the Ztar to xmille euros (which is still far enough feel of a real guitar), there are not too many choices! But how happy not having to do too much hassle at synth riffs, and his compositions! Also, another very big advantage: making partition with Guitar Pro, which works out flawlessly. on the other hand, it's a very big consumer of batteries, I left on an afternoon and she ate batteries completely NEW! So beware of the little round button ^ ^ With experience ... Well I'm happy because in this current budget there's nothing better to play the guitar synthesizer. But it seems that Fender will release in this genre too, should see what it's going to give! After 10 years I think the technique has evolved considerably. So let's say that I will ever be temporarily choice = p

Other Inspired Instruments other Electric Guitars