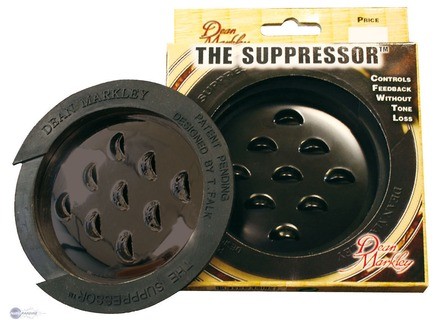 The Suppressor, Other Guitar Accessory from Dean Markley.


1 user review
Find it in the classifieds starting at $12 Avg used price: $9

Dean Markley The Suppressor
4
I used to have a relatively crappy acoustic electric made by Ovation, and one of the many things that would frustrate me about that guitar was the fact that it would feedback tremendously when I tried to plug it in to a PA or amplifier. I think that the main reason this was so frustrating was because I knew that there was something I could do because sometimes it didn't always do that (mainly when I was at home).
I eventually (well after I sold the guitar, sadly) discovered this thing. My first reaction was one of outright dismissal. I assumed that since it blocked the soundhole, that the tone would suffer tremendously. I was definitely wrong because I didn't really think about how acoustic-electric guitars work for the most part. They get virtually none of their tone from outside the soundhole, and that means that blocking it will do nothing as far as tone goes. What it will do is prevent the reverberation of your signal from entering the soundhole, thereby causing feedback.
If the only problem you have with your acoustic-electric is feedback, then I suggest you look into these, they are really cheap and have proven to be a lifesaver in many situations. Considering that I bought another guitar to avoid this problem, I highly recommend going the easier route, especially if you are already happy with your guitar as it is.
Did you find this review helpful?yesno
»

Other names: thesuppressor, the suppressor