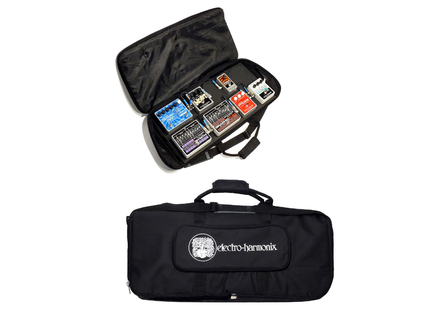 Buy this productView price information >
View other reviews for this product:
I use it for 3 or 4 years. I had a hard pedalboard and a Pedaltrain Mini that I no longer was using the cover at the end, hence my move to Pedalbag EHX, a little bigger and made for it. In my situation, the Pedalbag very advantageously replaces a rigid pedalboard:

- In transportation, Pedalbag is obviously much lighter than a pedalboard. It may need to wear Pedalbag and guitar with one hand, for example to pass the turnstiles of the Metro. These are details to the con but very significant in the long run. I will never emmerderais me to lug something that weighs a ton.

- In use, it has almost the same feeling as if the pedals were directly on the ground. Most pedalboard elevate the pedals, like Pedaltrain example. On stage, the soil is rarely flat, and it often happens that the pedalboard is a bit wobbly. The Pedalbag is flexible, easily wedge between two branches of the microphone stand, sit and pack up in two seconds.

The only complaint that I have it, it is the placement of the handle should have been on the other side. Here we sometimes walk on when you play. Apart from that, it is obvious that the pedals are not specially protected. For a big tour, using a pedalboard in flightcase is inevitable. But for an amateur guitarist who carries his own equipment, especially in transport, the Pedalbag in my opinion, by far the better choice.
See the source
Did you find this review helpful?yesno
Cookies help us improve performance, enhance user experience and deliver our services. By using our services, you agree to our use of cookies. Find out more.