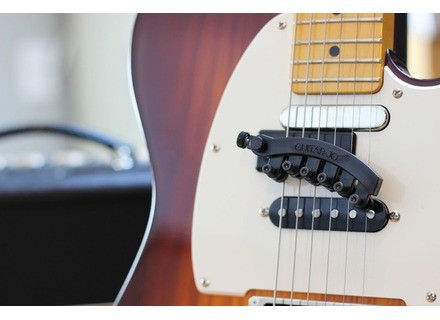 Guitar-Jo Guitar-Jo
4
SOUND:
With GUITAR-JO and some EQ tweaking you can make your electric guitar sound like a banjo. The YouTube video below is something I put together relatively quickly to show how easy it is:

What you’re hearing is a dry signal… nothing more than my Schecter B-24 plugged into my DAW. I did add a touch of delay and reverb, but not so much as to color the tone or make it sound like we’re in the Grand Canyon (just enough to add some dimension). I then altered the DAW’s EQ and fiddled (NOTE: no violin in the video) with my pickup selection and tone control. I’ll explain how that works in the section on ‘Ease of Use.’

OVERALL IMPRESSION:
This could be considered an ‘effect,’ although no pedal is used. Rather, it’s a mechanical device that alters your guitar’s timbre so that it sounds like a banjo. Anyone who plays guitar and banjo in a band knows that it can be inconvenient to set down a guitar, pick up a banjo, then set the banjo down to play the guitar again, etc. There may be a song or composition that necessitates nothing but guitar or banjo, which makes switching instruments less cumbersome or an issue. However, for those who want to add some banjo lines or who need to play the banjo only on occasion, the GUITAR-JO offers an excellent and cost-effective alternative… and is as easy to integrate by merely flipping dampeners over the strings.

Now, for those who do not play banjo, who refuse to invest in another instrument (a good banjo will cost at least $400) or simply want to experiment and have fun composing with a banjo sound, then a meager investment of only $45 can put the GUITAR-JO in your hands (and on your guitar). I was in that situation… looking for a used banjo just for some minor tinkering. Nothing says Americana like the banjo, and so if you’re into Country, Bluegrass or some simple Folk music and want to add a flavor to your playing and song writing the GUITAR-JO makes it easy and pain-free to get started.

EASE OF USE:
This is not a plug and play device, but it’s not that hard to get going either. The GUITAR-JO’s base attaches by way of microsuctions… tiny little suction cups that enable you to stick it on, remove it, re-stick it, etc., and if the guitar or the GUITAR-JO’s base gets a bit dirty it can be cleaned with a damp cloth (allow to dry to once again reuse the microsuction cups). You then attach to top part and screw down the GUITAR-JO’s dampeners (six of them) onto the strings. As you rotate each dampener and it lightly touches a string you eventually get a different timbre… or sound quality that mimics a banjo. Listening to just the guitar unplugged you will say “that sounds just like a banjo,” but you’re only part-way there. There’s a good instructional video that demonstrates the details of affixing the GUITAR-JO at this link:

Now, once you plug in and use the guitar’s electronics there will be some adjustments… which pickup to use and where your tone control should be relative to the chosen pickup. Essentially, to get that banjo sound an EQ would have the midrange up very high, bass down relatively low and treble a little less than half-way. The user information in the manual provides even more detail on using a multiband EQ, which is part of nearly everyone’s pedal board and certainly in every DAW, to achieve an authentic tone. The video I created resulted in about 5-minutes of tweaking.

RELIABILITY & DURABILITY:
The GUITAR-JO is a great addition to a guitar player’s gear and it’s well constructed. The framework is made of a quality plastic, whereas the adjustment screws (with dampeners on the ends) are made of metal. I did drop it without any mishap, and so the materials are tough enough. The mounting base’s microsuctional material seems to work rather well when removing it and replacing it – without any loss of stick (‘stiction’). If your guitar remains in a flat position (in a case), you can leave the GUITAR-JO on permanently if you wish, but I found that when hung up the weight of the device eventually caused it to fall off. Now, I don’t suspect it would fall off during play, and it did not for me; and the reason being is the placement of the GUITAR-JO’s base. When playing and the guitar is horizontal that means the base of the GUITAR-JO is vertical and the force (weight) of the unit has greater traction along the guitar. When the guitar hangs vertically, on the other hand, the weight of the GUITAR-JO pulls horizontally and eventually can pry the device off the guitar. Consequently, it is meant to be removed when not in use and affixed to the protective cover to keep the microsuction surface clean and dry.
Did you find this review helpful?yesno
»