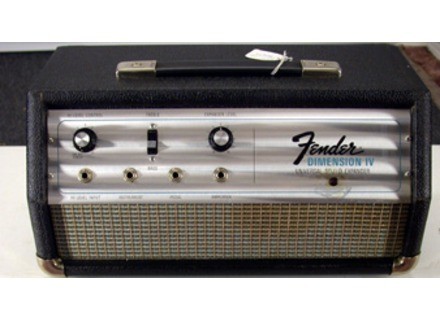 Fender Dimension IV
5
The Fender Dimension IV is an extremely rare and unique effect for your guitar and any other electronic instrument. It's, not so basically, a spacey, chorusy, delay effect. You can definitely tell that it's a product of the late 60's! It's very rare and was made for a brief period of time in the late 1960's. There is also a smaller version of the Dimension IV, but this review is for the larger version. It has 1/4" jacks on the front panel to make all of your connections and it isn't rackmountable as it sits like a mini guitar amp head.

There isn't much involved with the Fender Dimension IV, although I can't remember all of the controls off the top of my head. I don't think though that there's much more control beyond setting the volume and setting the amount of the effect that you'd like as it pretty much does it's thing. Good luck finding a manual, but you don't need it.

The sound of the Fender Dimension IV is definitely unlike any other effects that I've used before. Sure, it sounds a bit like chorus, a bit like reverb and delay, and a bit of something else kind of weird, but usually you'll hear those effects coming together from separate places and not an all in one like the Dimension IV is. It sounds great on electric guitar of course, but probably would be cool on some vintage keys or anything else that you want to sound super spacey.

Although you guys out there probably won't be able to find a Fender Dimension IV since they are seldom seen, it's still a cool effect to know about just in case! It'll add space and depth to your sound and is perfect for getting that super spacey guitar tone. Of course there are and easier ways to do it these days with digital effects, but the Fender Dimension IV has a special quality you won't fine elsewhere.
Did you find this review helpful?yesno
»