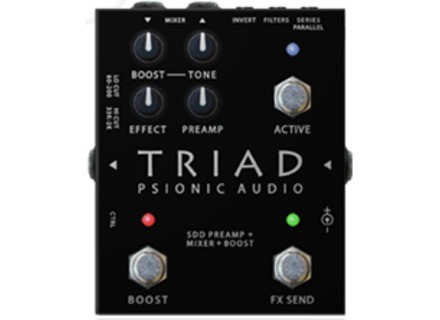 Psionic Audio Triad V2
5
The Triad is a sweet little gadget that combines a preamp with buffer, boost, loop and mixer in a small package.
It's a wall wart powered stomp box. All analog circuitry with instrument in, audio out. And input and output for the loop.
Also has a 1/8 inch stereo jack for remote switching of the boost and effects send if you want to use it in a rack set-up switched by relays controlled via your midi switcher ala G-system.
The loop can be configured as a series or a parallel loop.
Also the filters can be bypassed for the loop. And sweep between 60 and 200 Hz for the bass trim, and 1300 and 2200 KHz for the treble trim.

The set-up is simple enough, guitar in and amp out, plus an efx loop after gain.
The manual explains the functions well

How does it sound? It's one of my have stomp boxes because of the sound first. The pre-amp is designed to sound like the pre-amp in the old Korg SDD 3000 delay. And it really does. Just amazing. In addition to that you get the boost option. So unlike other pedals that try to sound like the SDD 3000 where you end up with a cool vintage crunch into a clean amp you get a three channel amp...clean, crunch and over the top raging gain.
Since the loop is configurable as series or parallel you can do some cool silly stuff. Like running an octave box so it's only on the delay return, or vice versa having a delay that is just the guitar note, but having the dry sound being doubled with an octave down.

What I like the most is how it sounds. Then how versatile it is. It's well worth its price. Had the original version as well. And its one of those have to replace if ever lost items.
This pedal although a little hard to find is so worth the money.