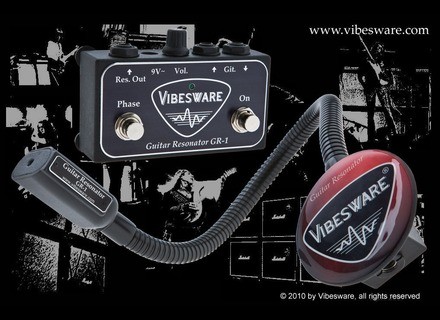 The Guitar Resonator is a harmonic feedback generator. It will bring any string vibration feedback on stage, in recording studio or at home. It produces powerful and reproducible harmonics at any sound volume. With almost any equipment. Even if playing with headphones. Gorgous feedback sounds of a fully turnded up amplifier stack ? Tones passing into feedback whenever wanted ? It is a new dimension of guitar playing.

The nice thing is that you get different harmonics depending on the Resonator Head position along the neck. This is done by moving the guitar neck with your body or with a direct arm movement.
Phase shifting is another way to switch between basic and harmonics feedback. The phase position is indicated by the red and blue light. Phase shifting can be done as a preset or for changing the feedback tone while playing.

Up to three strings can be agitated at the same time. This can be used for feedback with chords. Typically, the feedback of one string dominates. This is similar to amplifier feedback but with the difference that the dominating string can be forced by the Resonators head position. This can be done by moving the Resonator from the lower to the upper strings or the other way round. By this the dominiating string can be changed while playing.

Did you find this tutorial helpful?yesno